Amethi Constituency Continues to Give Shock with Surendra Singh Demise 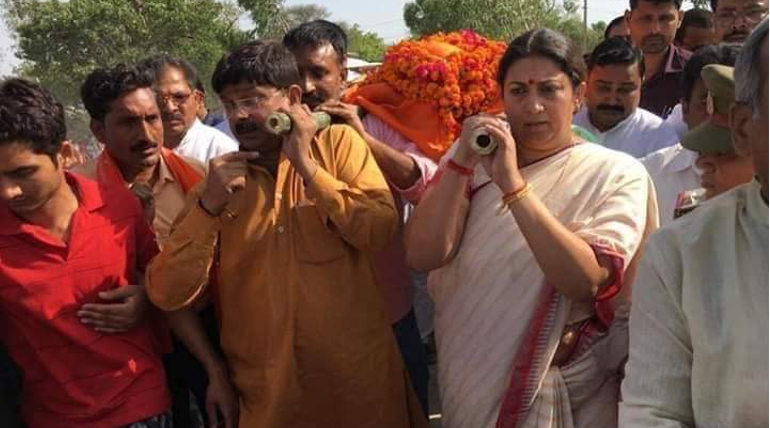 It is indeed shocking across the country that Amethiâ€™s legacy is broken with a new government being formed after four decades. With the shock still ubiquitous, there occurred first post-poll violence in Uttar Pradesh where Surendra Singh who frequented with Smriti Irani the winning leader of Amethi from BJP who superseded Rahul Gandhi, was shot dead by two unidentified men on May 26. Smriti Irani attacked Congress leader Rahul Gandhiâ€™s remark "take care of Amethi with love." She urged party members to exercise restraint to win the ploy made by Congress party to terrorize and disintegrate the Amethi ground. The police-men so far have not ruled out the possibility of it being a political murder.

Smriti Irani reached Amethi in the afternoon hours and was one of the pallbearers at the aideâ€™s funeral. She shouldered to her aide breaking the stereotype and this is hinted in the media as one of the women empowerment moves. Surendra Singh was shot dead at his residence around 3 P.M on Sunday when he was sleeping according to his son. Rukmani Singh his wife claimed that her husband did not have any rivalry and was transparent. He was murdered only after he supported and campaigned with the BJP leader.

Police have investigated and came up with a clue which was not publicized yet. But it was told that the old enmity has dragged him to this fate. Also, police-men are scrutinizing this case for political involvement. Surendraâ€™s aide Smriti stated that it has been a policy of Narendra Modi and Yogi Adityanath to ensure justice for all. "I have promised before Surendrajiâ€™s family. The one who fired at him and the one who ordered it will be handcuffed and sentenced. Even if have to knock the doors of Supreme Court to get the justice will never step back," she promised