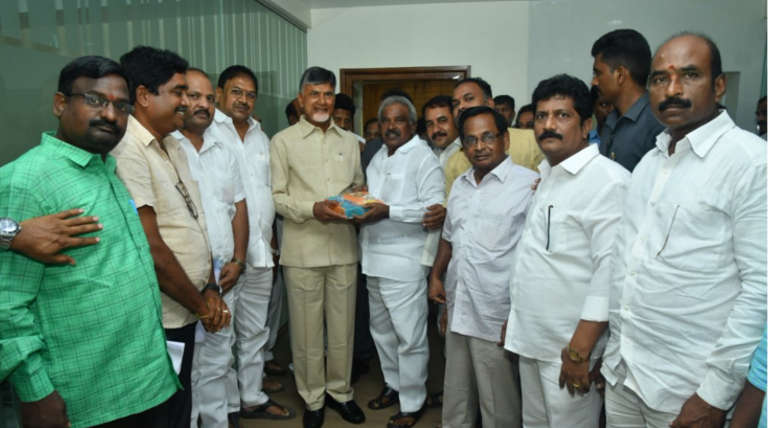 It was a humiliating defeat to the ruling TDP party in the elections and the defeat has not been attributed to EVM machines like the way it is wide-spread now. Former Chief Minister and TDP National President Chandrababu Naidu has given a positive note that the TDP will play a constructive opposition role in this stint. "We will give ample time to YSRCP Jaganmohan Reddy (Chief Minister-designate) to pursue and fulfill his promises one by one. Getting the vigor from the veteran leader N.T. Ramarao on his birth anniversary, we will never get disheartened and work revitalizing us," Naidu highlighted.

On N.T.Ramarao's birth anniversary the former Chief Minister addressed the gathering. It is reported that Naidu stated Ramarao's attitude and character of being unharmed with challenges. "Though he got defeated several times he sprang back to power with his rejuvenated spirit. I am not here to blame on EVMs or the party colleagues and workers," pointed Naidu. Also he was keen in getting the comments from the party workers on the partyâ€™s failure.

Also TDP leader stated 40% of the people voted for TDP and that should never be forgotten. It is necessary to meet their expectations. But TDP workers like Chandrika and Sridhar didnâ€™t want to put on the blame on themselves but the leaders. "Neither was I nor the EVMs failed but the leaders," commented Chandrika. Everyone pondered and analyzed the reasons for the partyâ€™s defeat and discussed on the corrective actions to be taken. "Donâ€™t get discouraged. I stood by you for three decades. Resurrection is the phase we are undergoing now. Put our party first and the family next, we will be able to win the phase we are going through now," Naidu asserted.  TDP senior leaders like Kimidi Kala Venkat Rao,  Yanamala Ramakrishnudu, Siva Prasada Rao, Galla Aruna Kumari also stressed the need to chalk out plans to get the party back to track.