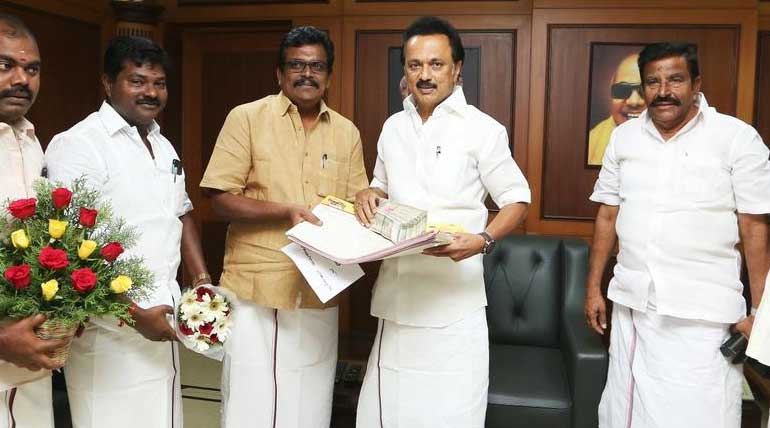 Thanga Tamil Selvan handed to Stalin over 27,200 applications of AIADMK functionaries to join DMK. An erstwhile close confidante of Sasikala and strongman of AIADMK in Theni, Thanga Tamil Selvan recently joined DMK. Today he met the leader of the opposition and now his party president, MK Stalin and handed him over these applications. It was a long-expected event to happen and has now happened in Arivalayam.

A close confidante of Jayalalitha and Sasika, Thanga Tamil Selvan was also a prominent figure of AIADMK until recently. Many party posts in AIADMK were only given on his recommendations. After the split in AIADMK, he sided with Dinakaran, the nephew of Sasikala. He was a loyal soldier until he was neglected by him and joined DMK recently. He has his vote base in Theni district. Today's 27,200 applications of AIADMK members joining DMK shows his clout in Theni. It will be a big blow for both AMMK and AIADMK.

After joining DMK, the first election was in Vellore for the working of Thanga Tamil Selvan in DMK. Being a foot soldier, he did splendid work in Vellore for the DMK to win marginally. Tamilselvan will benefit DMK, which is continuously winning elections. It is because of him knowing the strength of AIADMK candidates strength and weaknesses. He could be an asset for DMK in Theni during the civic body elections if they are held.

Thanga Tamil Selvan may contest as DMK candidate against OPS in the coming assembly elections:

DMK, which has a history of honouring other party members joining them, may field Tamilselvan against OPS in the coming assembly elections. If such a situation arises, it could be a fantastic contest between the two former friends to bitter rivals now.

Thanga Tamilselvan is sure an asset to any party and his today's action of joining 27,200 AIADMK men from Theni once again proves it.