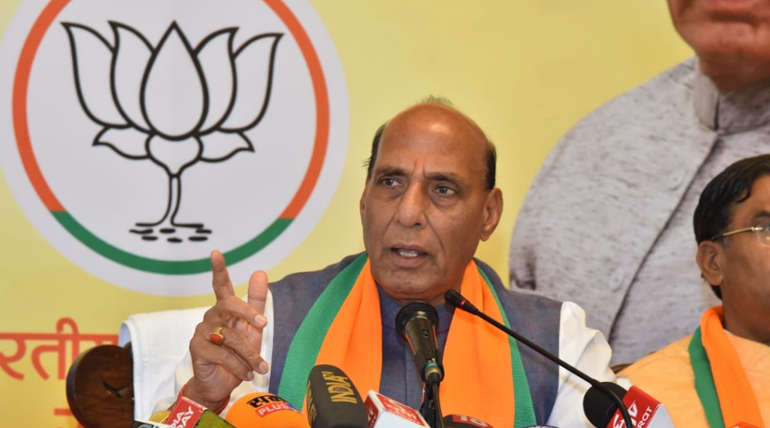 Highlights of Phase-5 Lok Sabha Election 2019: Voting started for Phase-5 of Lok Sabha elections today with huge expectations across 7 states which include Bihar, Jharkhand, Madhya Pradesh, Rajasthan, Uttar Pradesh, Bengal and Jammu and Kashmir. This phase kindles â€œnever-before expectationsâ€ as a number of big political names are queued in the fray. The top politicians who encounter in this phase are Rahul Gandhi from Amethi, Sonia Gandhi from Raebareli and BJP union ministers Rajnath Singh and Smriti Irani. This fifth phase of polling for 14 seats in Uttar Pradesh ignites a lot of interest as BJP won 12 out of 14 in 2014 elections.  Rahulâ€™s Amethi and Sonia Gandhiâ€™s Raebareli are the only 2 constituencies in the kitty of congress out of 80 constituencies across the state.

Union minister Rajnath Singh is seeking re-election from Lucknow and Smriti Irani takes on Rahul from Amethi. It is also stated that Smriti Irani alleged booth capturing in Amethi. But the Congress spokesperson countered and zeroed out the allegation. It is countered in such a way that Smriti Irani has sensed her defeat and is wailing otherwise out of fear. â€œThese excuses will never work out. Twists and turns in politics should be dare-confronted; two grenade attacks in polling booth are also reported from Cahapora in Pulwama. But no causalities reported.

Amidst all these, it is said that BJP National Secretary Ram Madhav has forecast that the Prime Minister Narendra Modi-led front would require more support from allies to get crowned from the centre to form the next government. Accusations are also reported from Bengal on duplication of polling stating the mock polls were not deleted. Altogether in todayâ€™s elections, 51 seats are going for polls with just two more phases to go. In these 51 phases currently, BJP sits on 41 phases and Congress in just 2 phases. The split for this phase is reported as follows (BJP 22 candidates, Congress 14 candidates, BSP 9 candidates and SP has 7 candidates). It is indeed an â€œanxiety build-upâ€ and â€œwait and watchâ€ phase.