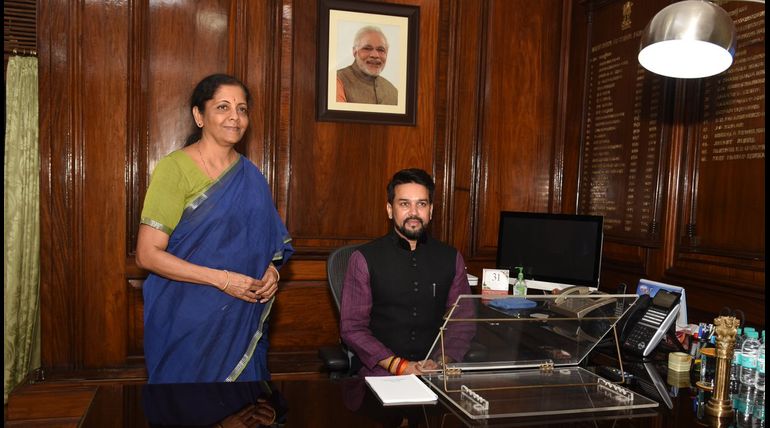 The portfolio allotment yesterday raised many eyebrows across India. Apart from Amit Shah given the home ministry, there were two surprise allotments. One was the finance ministry given to Nirmala Seetharaman, and the other is the Human resource development given to Ramesh Pokhriyal Nishank. He is replacing Prakash Javedkar who was doing a fantastic job as the Human Resource Ministry. Now he is the information and broadcasting minister.

Nirmala again the second woman Finance Minister of India: After her stint as the second woman Defense Minister of India only after Indira Gandhi, she has repeated it. This time it in the form of becoming the second woman finance minister and again only next to Indira Gandhi. But with GDP at 5.8 % lowest in the past 17 quarters and the announcement of the Government, yesterday of the unemployment is at its lowest of 6 % in 45 years, it is going to be tough for her. In the last NDA rule, she was the commerce minister until she became the defence minister. There were mixed opinions about her functioning in the ministry. But is she capable of filling in the shoes of Arun Jaitley and others to meet the challenges has to be seen in the coming years?

The Human Resource minister could change the fate of the children: The surprise inclusion of Ramesh Pokhriyan Nishank, who is a hardcore RSS affiliate, has raised many doubts. RSS for some time has been trying to change the curriculum and the learning pattern of Indian students. A teacher by profession, Ramesh could be the tool for implementing the RSS policies into the Indian education system. Already yesterday evening it was announced that the 5+3+3+4 curriculum in all schools replaces the 10+2 curriculum. The future of India is in the hands of Prime Minister and his cabinet colleagues. All 130 billion people expect good schemes and policies to make their life better and safeguard and brighten their children's future.