Will Kumaraswamy be the chief minister of Karnataka after the trust vote in Assembly today? 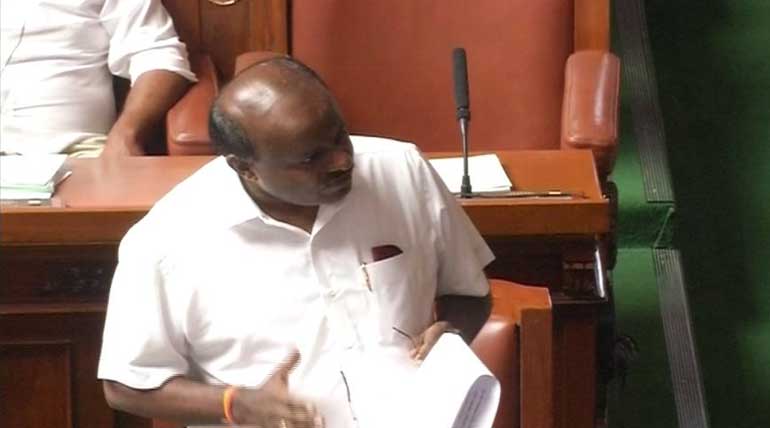 Will Kumaraswamy be the chief minister of Karnataka after the trust vote in Assembly today. @indiavotekar

Will Kumaraswamy be the chief minister of Karnataka after the trust vote in Assembly today?

The Karnataka political drama after going to Supreme court is to end today in Bengaluru. The trust motion moved by the Chief Minister Kumaraswamy will be tested on the Assembly today.

Siddramaiah, Karnataka Congress leader has requested time in the trust vote as he is one of the respondents in the Supreme Court case.

What will happen today?

The Supreme Court yesterday gave a reprieve to the rebel MLAs by ordering the speaker to not insist on their presence in the voting of the trust motion today.  Also, it confirmed that the speaker is at liberty to decide on the resignation of the rebel MLAs.

The rebel MLAs not to attend Assembly for the vote of trust is considered as the death knell the 11 months long JD(s) â€“ Congress coalition government in Karnataka. Without the rebel MLAs, the coalition will be reduced to 102 seats with BJP claiming to have the support of 107 MLAs.

What happened in the Assembly in the morning session?

To that, Kumaraswamy commented that Yedurappa seems to be in a hurry.  Then there was high drama when the speaker allowed the parties to issue whip to their MLAs.  Speaker said he could take decisions on the MLAs soon and will not be based on anything.

Even though the assembly session opened in the morning, nothing fruitful transpired in there.  Now the house is adjourned for lunch and to reopen at 3 PM.

What could be the happenings in the evening?

Today there were two new developments of Siddaramaiah asking more time to present his case in the Supreme Court.  The other one is the speaker asking parties to issue whip to all MLAs.  Based on these developments,  it is like a thriller of what could happen in the evening.

Many leaders feel that without deciding on the fate of the resignations of the rebel MLAs, the trust of motion is of no use.

All have to wait till evening to know whether the political drama in Karnataka will continue for more days or end with Kumrasamy resigning today after the decision on the trust vote in Assembly.