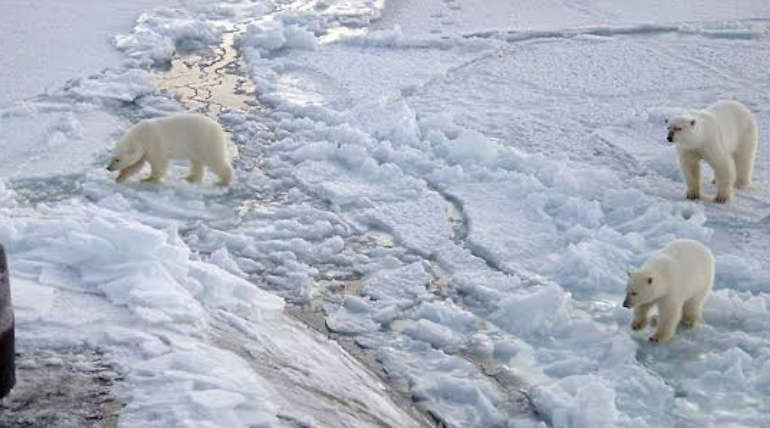 Polar Bear seeks for food by entering Russia's Far North Village Ryrkaipy: Polar bears are inhabitants of the Arctic circle and their surrounding lands. Due to the climatic change, more than 56 polar bears descended upon the Northern tip of the Russian village Ryrkaipy in the Chukotka Autonomous Okrug.

The World Wildlife Fund of Russia stated that climate change was to blame, as unusually warm temperatures prevented coastal ice from forming in the Arctic circle.

Polar bears have surrounded nearly 1 km of the Ryrkaipy region of Arctic circle in Russia, says World Wildlife Fund. Less than 1000 people are living in that Russian village near the Arctic circle. Residents and Environmentalists analyze that the weak ice in the Arctic hinders the Polar bear species from roaming, thus leaving them in migrating towards the residential village.

Experts assume that scraggy polar bear was forced to come inside the nearby village in search of food due to the abnormally warming weather. Scientists estimated that plastics compromised nearly a quarter of the polar bears' diet and ate most of the seal cadavers.

Though Polar bears are not man-eaters, science predicts that they rarely attack humans. Due to less human interactions, Polar bear species are less fear for human beings and sometimes eat humans by slaughtering. Villagers of Ryrkaypiy have taken extra precautions, and children take buses to the school. Bear patrols are activated by WWF to prevent the entry of bears into homes and schools.

Researchers claim that occurrences like this are happening every year, but the number of polar bears migrating has become 5 to 56, now searching prey inland.

Tatyana Minenko of Bear Patrol told that feeding point with walrus carcasses had been created to stop the polar bears entering the residential area of the village.

The weather department of Russia in the Northern tip of the Arctic circle predicts that the fall of the coastal ice should freeze by December 11. Scientists state that Ryrkaypiy should not be there thinking about the fact of the village in the next five years.