This is how Bees avoid drowning 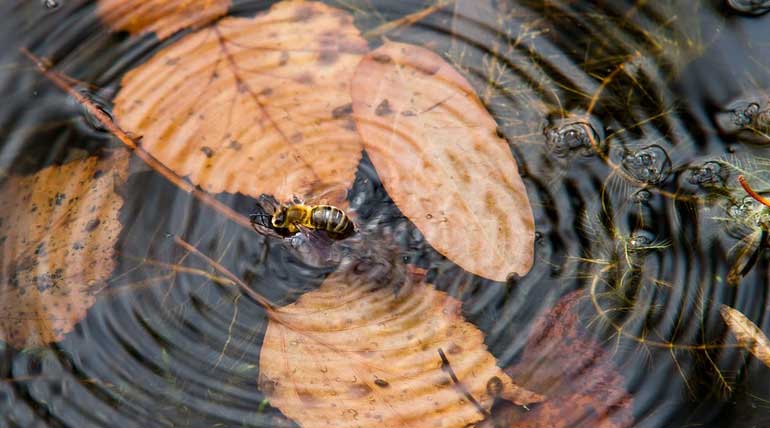 This is how Bees avoid drowning

A hot day would dehydrate everyone, and bees are no different to get the feel. In such a dehydrated day, a bee buzz over a drink in a nearby pond, but accidentally her wings stuck in a pondâ€™s water surface. Curiosity increased for the one who observed it watch the final minutes of the beeâ€™s living as there is no aerodynamics option for the bee. Concluded, it is a certain death until this astonishing deed from the bee awestruck everyone.

In a new study, researchers at Caltech have identified that there is a survival tactic found out by honeybees in order to sustain and escape the soggy predicament. They are propelling themselves to move forward with the wings to generate a wave that keeps the bees on the surface without getting drowned. â€œThe waves created also supports the body to move forward,â€ said a biomechanics engineer Morteza Gharib. The bee hydrofoils and surfs towards safety.

The strange discovery had happened by chance when Gharibâ€™s co-author, research engineer, Chris Roh observed a bee stuck in the water and grappling for life. Roh watched Beeâ€™s beating wings created ripples in the water surface. Roh didnâ€™t stop there but yanked the bee out of the water and took it to the research lab. Along with it, 32 bees have been taken for study, especially their flapping wings on the water surface. The experiment was done in a pan of water.

The flailing in the water surface balancing to propel forward was recorded in a slow-motion camera and observed the beeâ€™s pond exit strategy. Their flapping wings and the locomotion creates hydrodynamic momentum on the water surface in the form of asymmetric waves generating approximately 20myuN average thrust. In terms of force, it is described as the most energy-efficient.

The angle the bees keep to flap their wings is the accuracy expected to save it from drowning. With every second, by flapping the wings, the bee is able to move forward three body lengths per second. Seamless flapping is an issue as, after 5 minutes, fatigue might cause the motion to slow down. The bees can cover hence smaller ponds and water surfaces with this flapping hydrofoil strategy


This is how Bees avoid drowning