Orangutans are the Relatives of Extinct Large Ape 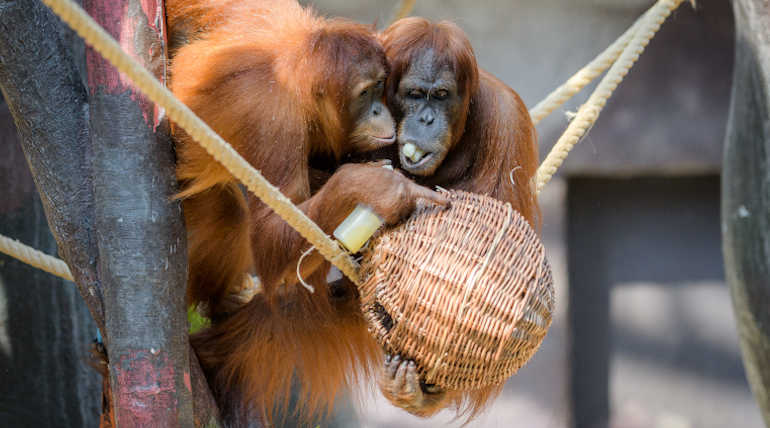 Orangutans are the Relatives of Extinct Large Ape

Molecular evidence from the giant apeâ€™s tooth confirms it is a distant cousin of today's orangutans.

Orangutans distant cousin only 2 million years old is found from new research published in Nature journal. The researchers of the University of Copenhagen have obtained molecular evidence by drilling the tooth of the giant ape Gigantopithecus Blacki to shed new light on the evolution of apes. The giant ape is found to be 10 feet tall and weighed around 600 kilograms. The teeth found in a Chinese cave proved that the giant ape was also sharing a common ancestor only 12 million years ago.

Dr. Frido Welker, of the University of Copenhagen, says that the giant female ape's ancient protein sequence compared with the apes live today confirm that it could be the distant cousin. It must have lived in the dense forest in southern China during the Pleistocene period. The research was done by drilling the teeth to crush them to powder to extract the protein remains and to weigh them with mass spectrometry technique. When compared to them with humans, orangutans, and primates like gorillas and chimpanzees, they were more similar to the orangutans.

Research on the evolution of big ape:

The teeth though found in 1935, were only able to identify it to be that of Gigantrophitheculs blacki to have lived in Southeast Asia two million years ago to three million years. But further information, including its relationship with other species, was hard to decipher. Only now the published research is throwing more light on the giant ape and its relationship with orangutans. As Dr. Frido Welker said, it might even lead to the evolutionary line leading to humans in the future.


Orangutans are the Relatives of Extinct Large Ape