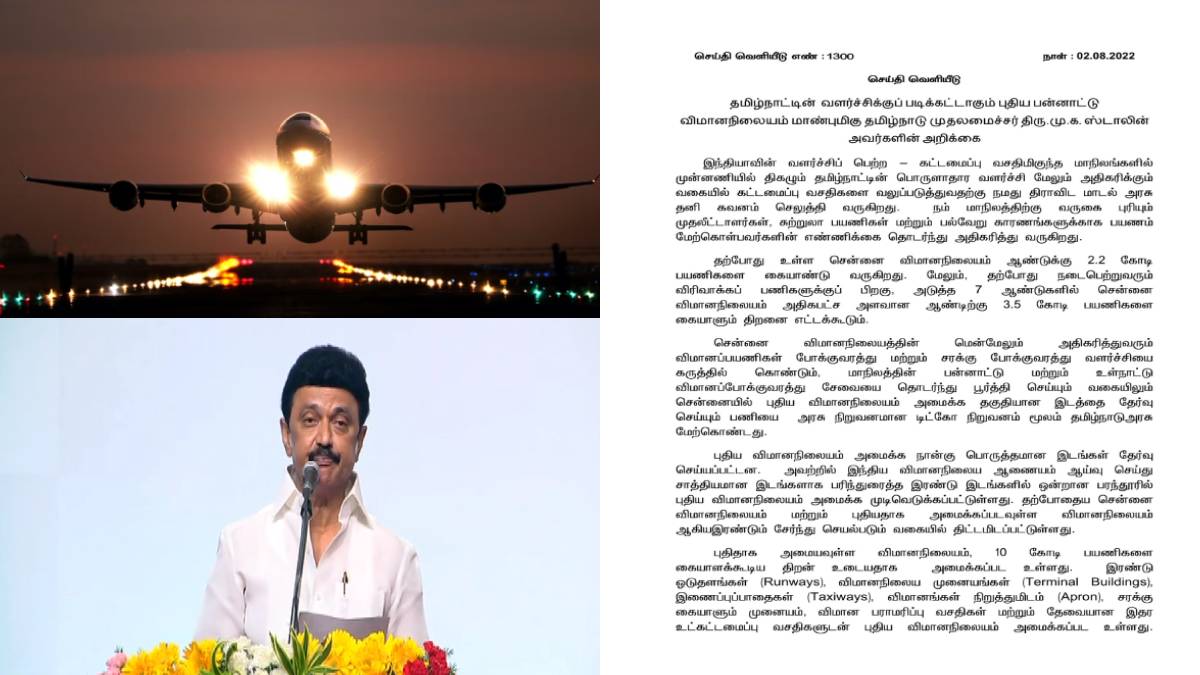 Chief Minister M.K. Stalin released a post stating, " Our Dravidian model government is paying special attention to strengthening the infrastructure facilities to increase the economic growth of Tamil Nadu, one of India's most developed and infrastructure-rich states. The number of investors, tourists and people travelling for various reasons is constantly increasing in our state. The existing Chennai airport handles 2.2 crore passengers annually. Also, after the ongoing expansion work, the Chennai airport will likely reach its peak annual handling capacity of 3.5 crore passengers in the next seven years.

Considering Chennai airport's ever-increasing passenger and cargo traffic growth and continuing to complement the state's international and domestic air traffic, Chennai will choose a suitable location for a new airport.

The Government of Tamil Nadu carried out the work through the government agency DITCO. Four suitable locations were selected for the new airport. It has been decided to construct a new airport at Parandur, one of the two locations that the Airports Authority of India has studied and recommended as possible locations.

The current proposed project cost is Rs 20,000 crore. The application will soon be submitted to a committee under the Union Ministry of Civil Aviation to seek approval for the site selected per the guidelines issued by the Union Ministry of Civil Aviation in 2008 for setting up a new airport. After approval by the International Development Association (IDA), the land for the project will be acquired, and work will be done to prepare the project report.

Following this, the in-principle approval for the airport project and permission to operate the airport will be sought from the Union Ministry of Aviation. While comparing the development of Tamil Nadu with other states and seeing a sign of progress, the Dravidian model government is working to show the development in comparison with the world countries in the future.

Implementation of the upcoming new airport project at Parantur is a stepping stone for the development of our state. This is yet another milestone in the journey towards achieving the lofty goal of making Tamil Nadu a $1 trillion economy." stated Chief Minister M. K. Stalin.

It's imperative for Chennai to have a new airport to meet its demands, attain our goal of One Trillion USD Economy & make Chennai the best destination for investments in Asia.

In this regard, I'm glad to announce that Chennai will have its new greenfield airport at #Parandur. pic.twitter.com/2snFXXqlG2