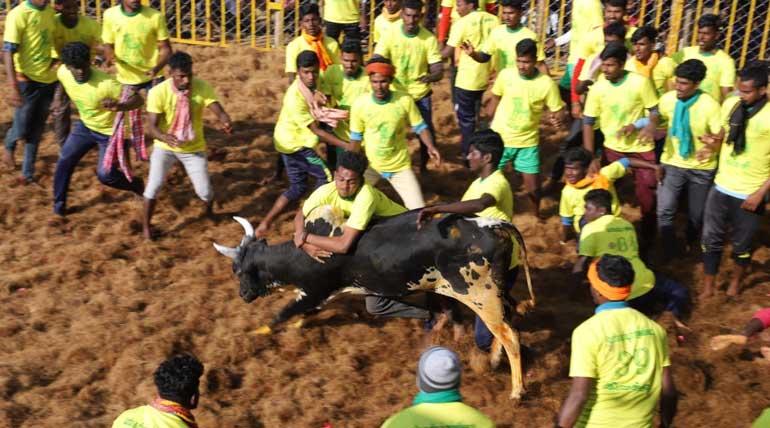 Jallikattu brings cheers among Tamil people to end Pongal festival with joy: Jallikattu made the Kanum Pongal festival of Tamil Nadu today, January 17 enjoyable for the Tamil people. But one person was gored to death, and 29 others suffered injuries in the most famous bull-taming center Alanganlur.

Shanmuga Rajeswaran, IG for the south zone, told the media that all safety arrangements had been well made for the Alanganallur bull-taming. Additional safety at the center place of action where the bulls are tamed is done. But in spite of all these safety arrangements, one brave young youth is dead in Alanganallur. In another Jallikattu, health minister Vijaya Baskar's bull was the winner, with no one able to tame it.  Ministers Udayakumar, Rajendra Bajali, was enjoying the bull-taming.

Yesterday January 16, during the cow Pongal, there was a big cockfight conducted in Kavanur in Ranipet. More than 50 playing fields were readied for the cocks to fight. More than 1000 cocks from across Tamil Nadu, Karnataka and Puducherry participated in the fight. Today, January 17, more than 3000 cocks are competing for prizes like refrigerator and others.

Jallikattu, one of the Tamil peoples' traditional sport, which is considered as a measure of braveness, is conducted every year during the Pongal festival time. In many parts of Tamil Nadu, the fierce bulls are tamed by the brave young Tamil youth. Even risking lives, they take pride in taming the bulls.  The struggle of who is going to win, either the well-groomed and gigantic bulls or the brave youth with bare hands, make it a thrilling sport for even foreigners to visit to watch it.