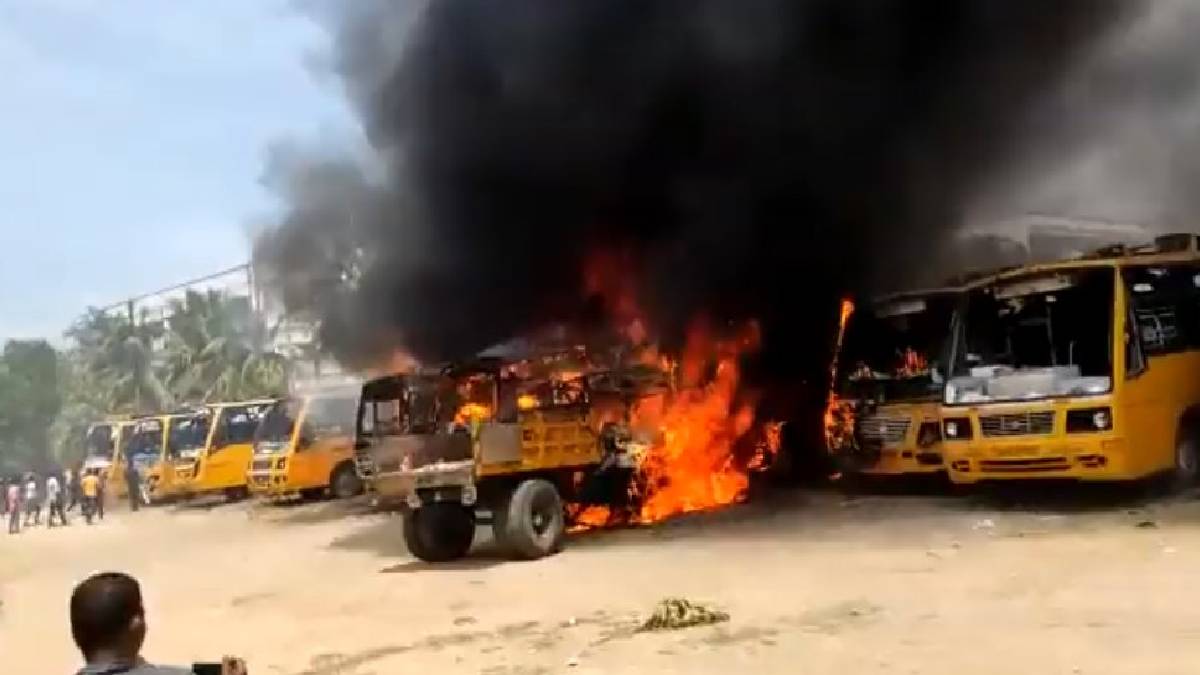 Following the suspicious death of 12th Standard student Srimathi, whether the incidents of violence in the Chinnasalem private school were planned. How did the protest turn out to be violent and riots? Severe actions have been taken against the people who were involved in the riots.

Srimathi, daughter of Ramalingam from Periyanesalur in the Cuddalore district, was studying in the Kaniyamoor Private Higher Secondary School near Chinnasalem. In this case, the school administration informed the parents in the early morning of the 13th that the student fell down from the 3rd floor of the hostel premises and was taken to the hospital.

Within 30 minutes, the student Srimathi was dead. After that, the parents went to the hospital with their relatives and saw the body of the student. They started protesting in front of the hospital in Kallakurichi that afternoon, saying that 'our daughter did not commit suicide. She was murdered'.

The next day the protest got stronger, and they blocked the road. Police came to the spot and dispersed the crowd. In this case, the autopsy report was released on the 16th. The student's parents refused to accept it, claiming it was a fake report and once again staged a protest at the Kallakurichi four-way junction.

The next day on the 17th, when many youths came to besiege the school at 10 am, the police stopped them. Later it erupted into great violence, and a violent mob ransacked the school. Various parties are sharing opinions that this violence was a well-planned riot.

Outside the school, on the national highway between Kallakurichi-Chinnasalem, while the protest group was engaged in a tug-of-war with the police, another gang entered the back of the school and set fire to the vehicles with kerosene and diesel and looted the property.

Many students' original mark sheets and other major certificates were burnt. As the fire spread rapidly inside the school premises, the fire engine that came to extinguish the fire was also turned away without being allowed to enter.

On Monday, two private school teachers were detained on suspicion of aiding suicide. J Krithiga, a mathematics teacher who also serves as the school's dormitory warden, and P Haripriya, a chemistry teacher, were detained after the case was reported under section 174 (1) of the CrPC and article 306 of the ICP. The school's correspondent C Ravikumar, secretary R Shanthi, and principal S Siva Sankaran had already been detained by police.

Police have now started showing their power and have arrested more than 302 men engaged in the violence. The riot video clearly shows who all looted things from the school, and those men were also arrested. Who is the reason behind the protest? Who triggered the protest? What are the messages that were shared on Whatsapp? Who were all there in that WhatsApp group? What was the news related to Srimathi shared? And many details on the sare taken into account.

With the help of the Cyber police, stern action has been taken, and the rioters will be arrested very soon. At the same time, Srimathi's autopsy result will be revealed, and the parent's requests are already considered.