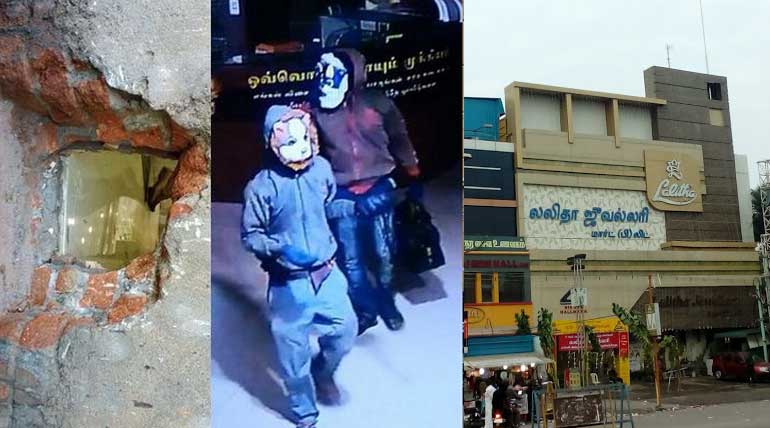 Trichy police are now in full swing to catch the culprits. They are now under tremendous pressure as a similar robbery on November 1st, 2018 of a bank in Trichy.  There is no breakthrough in the bank robbery so far.

As soon as the Lalithaa Jewellery staff complained to the patrol police yesterday at 8 AM, police swung into action. Sniffer dogs were brought to the spot, CCTV cameras were examined, lodges were being raided across Trichy, and the police take many such efforts.

How did the robbers carry out this Hollywood style heist in Trichy?

The backside of the three-story Lalithaa Jewellery is on the open space which belongs to a private educational institution. Yesterday night robbers made a hole on it to the size by which a man could enter it.

At 2 AM on October 2nd two animal face, masked robbers came into the hole and robbed Lalithaa Jewellery to the tune of Rs. 13 crores. They were also seen in CCTV cameras of changing the jewels taken inside the Lalithaa Jewellery into another bag. The robbers have used gloves, chili powder and were wearing masks not to be found by the police.

Though the shop is located on the Karur bypass road near the busy Chathiram bus stand of Trichy, the robbers easily carried out this heist. It raises many questions like