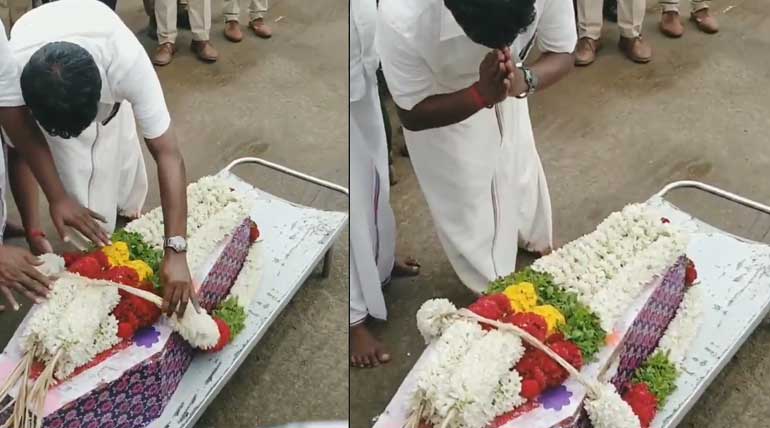 Nation mourns in sorrow on hearing the death news of Surjith now: J.Radhakrishnan, Commissioner of Revenue Administration, announced the death of Surjith now. The whole nation, including the Prime Minister, was wishing for Surjith to come alive. But the rescue operation of five days was only able to bring his dead body from the treacherous borewell hole.

His mother, Mary, was inconsolable seeing her two-year-old son's body. The whole nation is mourning his death now. The worst part is his suffering for more than 80 hours in that one feet hole at a depth of nearly 100 feet. The darkness, lack of food or water, and what else could have made that child die is even unthinkable.

Every year one of such incidents happens in India. Many movies are taken to show rocket flying to the moon and no proper infrastructure to save a kid from a hole in India. But who is to blame for Surjith's death in the hole?

Whole nation mourns Surjith's death: From prime minister to Rahul Gandhi, Chief minister, deputy chief minister, ministers, opposition party leaders, film personalities, and millions of Tamil people were eagerly waiting for Surjith to return. But the suspense ends now only with his death. What all efforts taken by hundreds of people without food and sleep have gone in vain.

Notably, the efforts of ministers Vijayabaskar, and Vellamandi Natrajan for the past five days are commendable. They did not leave any stone unturned for saving Surjith. But without proper techniques or efficient rig machines, it became impossible to save Surjith.

Uncovered borewell hole at Surjith's parents' cornfield: Surjith parents had the money to dig a borewell for water. But they did not care enough to cover it with a proper lid. Rain and other reasons are not acceptable for it to lose  Surjith now. As Kamal said, stringent fines should be imposed on those who do not cover their borewell holes.

Had this hole would have been dug on somewhere else private or the public could have caused more hardships. If in case of an individual, it could have lead to manhandling of the property owner and even cases filed to cause murder. In the case of public places, it could have been disastrous for the administration.

But being the private property of the Surjith family, at least those issues did not surface now. But a borewell lid costing nothing compared to the cost of digging the hole or the enormous amount of money, time, and days spent for the five days could have been saved.

Let child Surjith's death have a meaning for the millions of people watching the rescue operations for five days now. It should not be only for time pass and lessons should be learned to cover any hole in the vicinity to save young children like Surjith and also avoid accidents to other people, especially children and older people.

Will Surjith's death bring an end to the borewell menace in India? Only by bringing in strict laws to cover the borewell holes and hefty fines to the borewell digging companies and those responsible for it, can stop one more Surjith to stay in 100 feet depth without food, and water for five days and die pathetically.