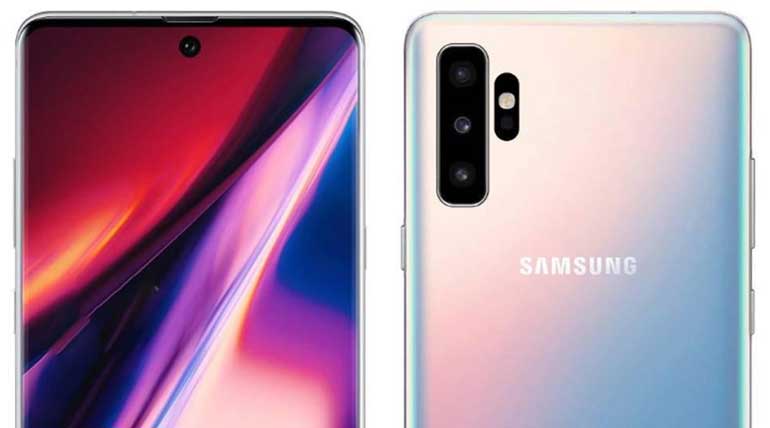 Samsung is likely to introduce significant changes with its next phablet, Galaxy Note 10. These changes would affect the design. They could eventually expand to other models including the Galaxy S11 expected for 2020.

The information comes from a recent report citing sources close to the plans of the giant Samsung. The Galaxy Note 10 is likely to abandon the "venerable" headphone jack. This choice is risky because strong criticism from fans are waiting. Samsung has decided to adopt a type C USB connector to ensure reloading and listening to music. The goal, however, would be to push for the adoption of wireless headphones.

The loss of the headphone jack would not be the only transformation. The firm also decided to remove the volume and power management buttons. All this little world would be replaced by "Capacitive or pressure-sensitive zones".

With LG Smartphones, Samsung is one of the few manufacturers of Android smartphones to reject the trend of removing headphone jack launched by Apple with the iPhone 7 in 2016. Brands such as Motorola, Google, OnePlus and Huawei have all abandoned the 3.5mm jack of their current flagships.

These changes would allow Samsung to save space to house a larger battery. We all look forward to the official arrival of Samsung's Galaxy Note 10, due to arrive in August. But until that happens, we will still have a lot of leaks and rumors about it, including discussions on a 45W fast charge.

Samsung already offers an "adaptive fast charge" feature on its smartphones, but while it remains acceptable, it still lags behind its smartphone competitors in speed and innovation. Of course, this is still not a reason to risk burning people literally or figuratively, but Samsung may have decided it was high time to take that risk again.

We have already heard that the Galaxy Note 10 would boast of a fast charge, but so far we do not know the exact figures yet. According to the source, the battery of the future phablette could be powered with a power of 45 W. This is a significant improvement over the 15 W charger and the charging technology provided with the current Galaxy Note 9.

Samsung introduced in its brand new processor: the Exynos 9820 / Snapdragon 855 processor. It can potentially compatible with 5G, and storage space of up to 1 TB and 12 GB of RAM. It succeeds the Exynos 9810 which is used in the Galaxy S9, Galaxy S9 + and Galaxy Note 9. As we can imagine, the new model will equip Galaxy Note 10 as like the Galaxy S10. The Exynos 9820 has an engraving of 8 nm, against 10 nm for the previous model. The processor part includes two custom 4th generation chips accompanied by two Cortex-A75 chips and four Cortex-A55 chips. At the level of the graphics part, one finds the ARM Mali G76 MP12. Another point highlighted by Samsung is a Neural Processing Unit (NPU) that is dedicated to artificial intelligence and everything around it.

In the center of the screen, the selfie camera may be allocated. On the back of the smartphone, four lenses may be in a vertical line placed on the top left-hand side. The lenses mostly like tele-photo, wide-angle and macro cameras along with the main lens. The ultra wide angle camera is to support 3rd party apps. This allows those apps to switch to use this wide camera on the mobile directly from the app. This means that we won't have to use the official camera app to take an ultra wide shot first and then share it in the other apps.

The megapixel war continues. While smartphones equipped with 48-megapixel digital cameras are already on the market, Samsung has formalized a 64-megapixel sensor: the Samsung ISOCELL Bright GW1.

Designed for mobiles, this sensor uses pixels of 0.8Âµm. In low light conditions, Samsung's 64-megapixel sensor is capable of fusing multiple pixels to produce brighter, 16-megapixel images. In conditions of good brightness, the sensor can take 64-megapixel images with more details. "With more pixels and advanced pixel technologies, the Samsung ISOCELL Bright GW1 and GM2 (a 48 megapixel sensor) cameras will bring a new level of photography to today's most stylish mobile devices, which will enhance and contribute to change the way we record our daily lives, "said Yongin Park, executive vice president at Samsung.

Then, the Galaxy Note 10 will also arrive in black, silver and white, so that Samsung could use the new colors to differentiate the two models. This means that South Koreans could use a strategy similar to that of the Galaxy S10, in which the base version is available in many other colors, including yellow. The Galaxy Note 10 5G will likely be sold in black, silver and white as well, and we can believe that a gold version could also happen, from the beginning or shortly after launch in a special edition intended for specific markets.

The existence of a Galaxy Note 5G has been confirmed and would also have screen sizes of 6.28 inches and then 6.75 inches for the Note Pro. The amount of RAM should also vary between 8 GB and 12 GB depending on the model. For storage capacity, users will have a minimum of 128GB of space up to 1TB.

Samsung Electronics launched another praise for its Galaxy Note 9, which has evolved more strongly with the S Pen, which provides excellent usability and convenience. The smart S pen of Galaxy Note 9 is able to run your favorite apps by the remote control of pictures, movies, galleries, etc. just by pressing the button. The S Pen is equipped with low-power Bluetooth and is plugged into the smartphone in about 40 seconds. The S pen has a pen tip diameter of 0.7mm, and the pressure is divided into 4096 steps to provide natural writing feel as if it is written on real paper, and it supports IP68 waterproof and dustproof grades. Of course, We expect this implements in Note 10 also.

Finally, let's talk about rates. Note 10 will remain on the same basis as Note 9 with little more expensive. As for the 5G variations, the same difference should be added. For assumed information, the Galaxy S10 5G can cost $1,400. The account is good. To discover the Note 10, it will wait until its official announcement, the leaks are not yet all granted on this subject.

Finally, Samsung generally launches its Galaxy Note between August and mid-September. It should not derogate from its tradition. For now, no information on the release date or official presentation.