Indian sprinter Dhanalakshmi Sekar hails from Guntur village in Tiruchirappalli district of Tamil Nadu. The 24-year-old Dhanalakshmi set a national record in the 200m race held in Almaty in June this year in 22.89 seconds. In that series, Dhanalakshmi defeated the 2-star players Hima Das and Dutee Chand and earned the name of India's fastest player.

In May, while preparing to participate in the Commonwealth Games in Birmingham, the test results revealed that she had taken an anabolic steroid which the World Anti-Doping Agency bans. Following this, she was dropped from the Indian team for the Commonwealth Games. She is currently banned from all competitions for the next three years.

The Athletics Integrity Unit usually imposes a four-year ban on those who fail doping tests. Dhanalakshmi's ban has been reduced to 3 years after she admitted to doping and accepted the ban. With a 3-year ban, the medals won by Dhanalakshmi will also be returned.

AIU has said, "On 19 July 2022, the Athlete returned the Admission of Anti-Doping Rule Violation and Acceptance of Consequences Form signed. The Athlete shall therefore receive a one (1) year reduction in the asserted period of Ineligibility pursuant to Rule 10.8.1 based on early admission and acceptance of sanction". It is to note that she was a reserve member of India's relay squad at the Tokyo Olympics last year. 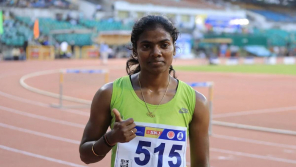