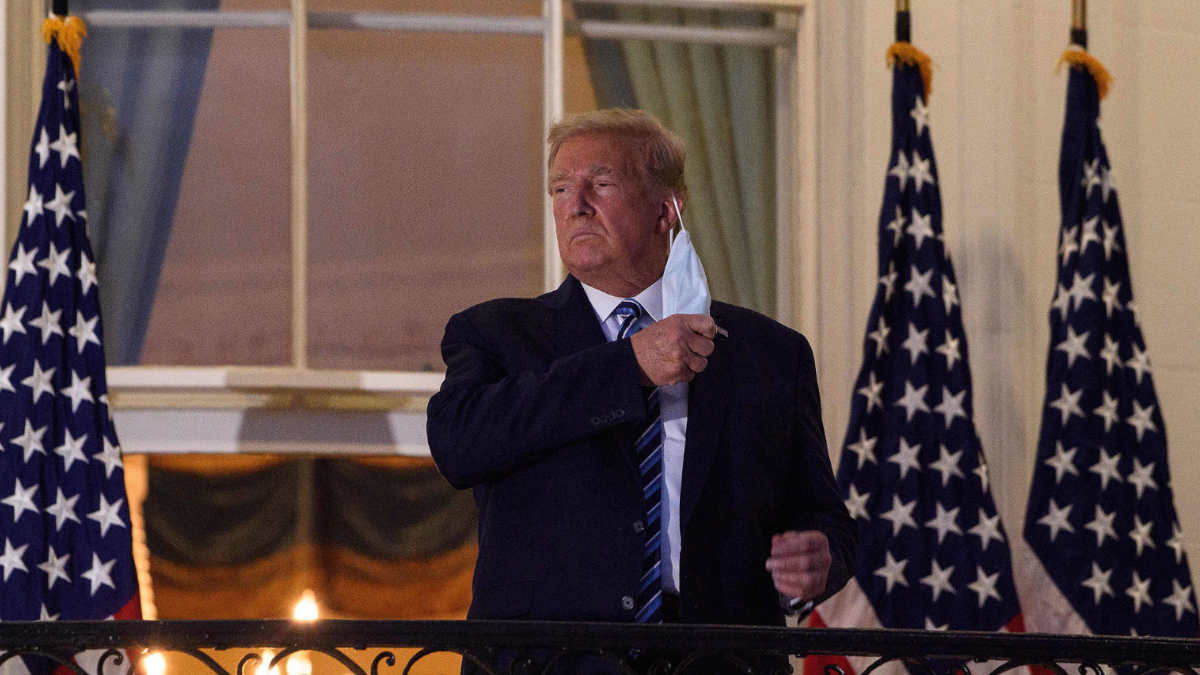 On October 2, Trump tweeted reveling, himself and his wife Melania Trump had tested positive for the novel coronavirus. Following the results, they both were quarantined and received treatments to recover fast because the US presidential election is approaching.

Friday, he was hospitalized at Walter Reed Medical Center for the treatment. On Monday, he returned to the white house robustly. How is it possible, while other people were losing their lives over corona? How could a 74-year-old man recover from deadly contagion in 4 days?

Donald Trump has returned to the White House within 72 hours of being admitted to the hospital. After receiving treatments and recovering from intensive care, he met the media.

Trump came to Truman Balcony of the White House and gave the reporters a pose to click good pictures of him. Then, he pulls off his mask and puts it in his pocket, as deliberately telling that Americans should not be frightened by the coronavirus.

Before Trump was admitted to the hospital, he received testosterone antibody therapy Regeneron, which could lower coronavirus levels. It showed promising results on a test involving 275 patients. But approval from the Food and Drug Administration for the treatment emergency is not yet given. The biotech said Regeneron was imposed after receiving a "mercy petition" from Trump's doctors.

In addition to experimental antibody therapy, Trump was diagnosed with Remdesivir and Dexamethasone. Dr. Jonathan Rainer, a professor of medicine at George Washington University, said: "The President is the only patient who receives this special drug. The U.S. Centers didn't approve Remdecivir for corona treatment, but it does have emergency use approval from the company."

It is noteworthy that Donald Trump has been treated with 3 different drugs to handle corona in the final stages of the trial.

Trump tweet - feeling  better than I did 20 years ago:

After discharge, he tweeted on his social media, saying, "I feel better than I did 20 years ago".  He also said he is not afraid of the corona at the moment and asked his people not to be afraid of COVID, don't allow the contagion to dominate their lives.

Added, Under his administration, people have developed tremendous knowledge of COVID and excellent medicines. Meanwhile, a senior White House official said President Trump was recovering quickly and would return to normalcy as soon as possible.

Trump has been criticized on social media for being negligent. He removed his masks to pose for pictures. Medical experts suggest, wearing a mask is an effective way to control the spread of corona. After getting treatment from intensive care, he needs to be cautious for a few more days. But he casually removes the mask to show his full face for photos.

Replying Trump's Tweet, an American citizen tweeted, " When Trump is gone, I will feel better than I have in twenty years."