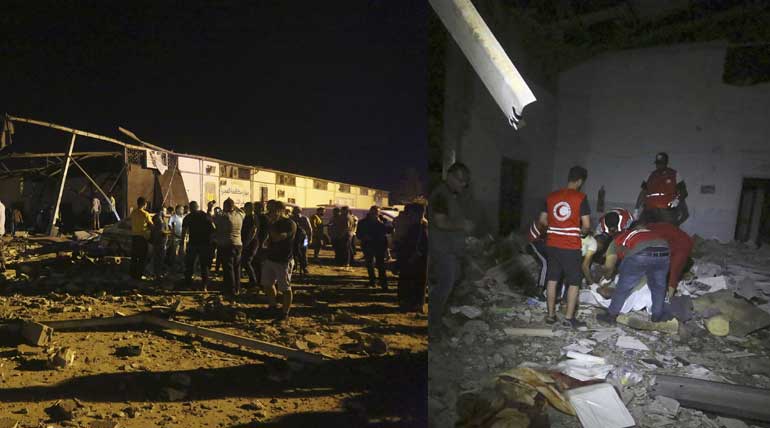 Airstrike kills 40 people in the migrant detention Centre, Libya: In Tripoli's Tajoura, 40 killed and leaving 80 migrants wounded in the detention centre. This information was reported by the spokesman of the health ministry Malek Merset. He has also posted the photos of migrants taken in an ambulance to hospitals. This terrible incident has happened in Libya's capital where the country's government is UNsupported.

The UN Refugee agency has condemned this event non-detention centre where more than 600 migrants and refugees were present. The footage of this incident is going viral which is said to be from inside the migrant detention centre shows blood and body parts mixed.

The Tripoli government has accused the Libyan national army which is led by Khalifa Hifter and further It has called the UN support mission which acts in Libya to form a fact-finding committee for the investigation. It is also said that the spokesman of Khalifa Hifter did not answer the phone calls immediately to talk on the issue.

The forces of Khalifa control much of the countries east and South. More than 6000 migrants from Eritrea, Ethiopia, Somalia, and Sudan and some other nations are logged in dozens of facilities in Libya that are run by the militias. They are often accused of torture and other human right abuses.

Almost all the migrants were apprehended by the Libyan coast Guards who are trained and why the European Union while trying to cross the Mediterranean sea that leads into Europe. The UN Refugee agency has said that more than 3000 migrants are in danger who are held in the detention centres.

In 2011 after the Killing of Gaddafi Libya became a major crossing point for migrants.