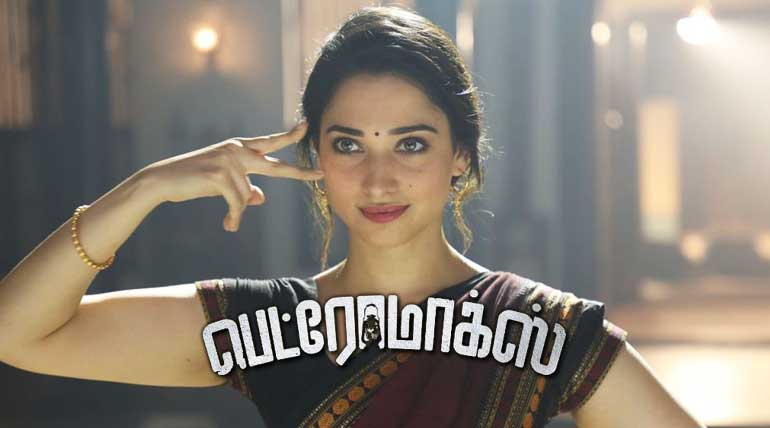 "Petromax in 31 days"-Terror Tamannah's Speech at Press Meet: Tamannaah Bhatia thanks everyone at the Press meet of Petromax. Petromax is the remake of Tapsee's Telugu movie; I'm sure it touches the Tamil audience expectation, Tamannaah tells. After Bahubaali and Sye Raa projects, I'm overwhelmed to do films like Petromax in a short 31 days period of the shoot. Being the director's second film, the crew's pace and co-operation is one noticeable factor, Tamannah relishes the Petromax team.

A horror comedy movie 'Petromax' starring Tamannaah is all set for the big day. Petromax produced under the pennant of Eagle's Eye Production with the Adhe Kangal film director Rohin Venkatesan. The film scheduled for release this October 11th, 2019 in Tamilnadu. Tamannaah got used to the possessed character films after acting in Devi and Devi 2.

Petromax Comedy Horror with a bunch of comedians:

The film is a judgment to the most popular comedy "Petromax Light' eh tha Venumaa" dialogue by comedy king Goundamani in Vijayakanth's movie. Petromax casting satisfies the comedy journal with a bunch of comedy crew. Munishkanth, Sathyan, Yogi babu, Kaali Venkat, Livingston co-stars Tamannah for the unstoppable giggles in theatres. We can't imagine the level of comedy with these entertainers in Petromax.

'No Payment' in 15 Films: Munishkanth in press meet last day funs the production about his correct payment settlement in Petromax; He adds that he got married, gave birth to a child and still didn't get the payment in 15 movies. Kaali Venkat reveals about committing in Petromax and says Tamannaah is a terror actress at the beginning of the shoot; She is one fun-filled actress to work with after days, Kaali Venkat titters.

Rohin Venkatesan pays gratitude to Ghibran garu for the music composition in Petromax. The sounds are a ruling part of horror movies and Ghibran scores in beats of Petromax. The director appreciates Chandru for the first look poster and also a second-time combo of Adhe Kangal's editor Leo John Paul in Petromax. He also expresses his liking towards the title 'Petromax' from the comedy. Tamil writers will get applause and recognition soon, Rohin in the press meet.

Petromax is hitting the silver screen space this October 11th, 2019, to possess all. Get thrilled with infinite jokes of Petromax with popcorn this weekend.