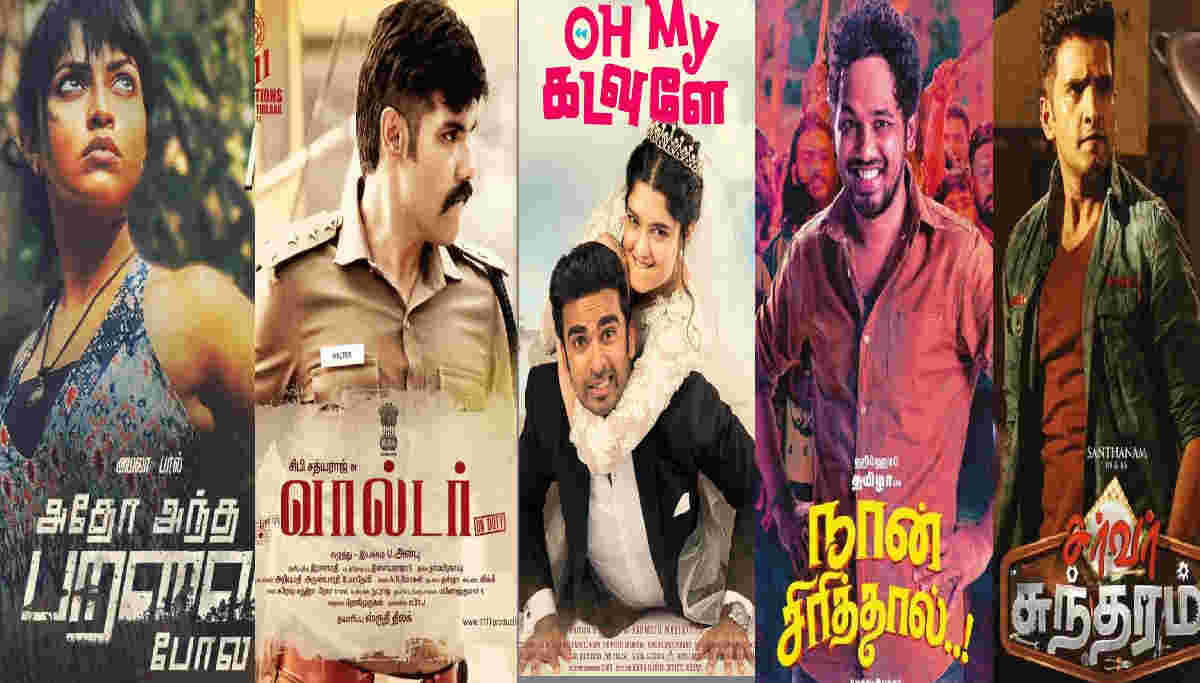 Movies and weekend is one good entertainment combo which never fails to surprise the cinema freaks every week. Likewise, every Friday of a week begins as a welcoming note for the new movies releasing on theatres.

Like adding more fun to this Valentine's Day, many Tamil movies are in the releasing list, which is all set to hit the silver screens for this 14th Friday to cherish the token of love.

Let's check out some list of Kollywood flicks releasing this February 14th,2020:

Naan Sirithal is an upcoming HipHop Tamizha film that engages right from the first look with intriguing facts followed by the release of songs correlating the present happening life. The film bankrolled by Sundar.C's Avni Creations co-stars Iswarya Menon and Eruma Saani Vijay in the prominent leadership roles. Debutant Director Raana directs Naan Sirithal keeping his short film Keka Beka Keka Beka as a content driver. From the title, it is clear that film will be an ultimate laugh riot on the theatre screens this February 14.

Joshua Imai Pol Kaakha is an upcoming Hitman's Bodyguard like thriller Tamil language film starring Varun, Raahei in the lead roles. The ever-stylish filmmaker Gautham Vasudev Menon never goes out of his rage, proving one more in the Joshua teaser released days back. Bankrolled by Vels Film International Ishari K.Ganesh, Joshua cast and crew seems to mirror the Enai Nokki Paayum Thota technicians Darbuka Siva to score the music and lights by S.R.Kathir.The movie plots to save a high profile client by 'Puppy' movie actor, Varun, in a smart look. The teaser revolves around the story of "A hitman with a sole purpose to save, protect, and deliver Joshua." Always Gautham Menon heroines are mesmerizing, and debutant Raahei never failed to score from the director. Joshua is all set to hit the big screen within few days on Feb 14, and to all known factors, GVM direction will have a stylish message for the movie addicts.

Amala Paul is starring in Adho Andha Paravai Pola as the main lead co-stars Ashish Vidhyarthi and Samir Kochhar. Produced by Jones, debut director K.R.Vinoth creates this intriguing thriller where Amala Paul roams around in the forest, depicts as teaser cuts for promotion. With a postponement in the delay to release in 2019, the film is all set to meet the silver screens this Feb 14. Above all, Amala is doing several women-centric films after Aadai, and this upcoming seems to be better than the previous flick. Jakes Bejoy composes the music.

This flick releasing on Friday stars Santhanam and Vaibhavi Shandiliya in the lead roles. Directed by Anand Balko, Server Sundaram prompts to be an action-comedy movie under the music of Santhosh Narayanan. The movie title outlines the story of a chef working in a hotel and expected to depict the controversies faced by him as well. J.Selvakumar bankrolls the movie under the banner of Kennaya Films.

Day Knight movie hits the screen this February is a mystery thriller movie starring Annam Shajan and Adharsh in the lead roles. Directed by Kettavan fame director N.K. Nandi, Day Knight movie will roll on the silver screen this Friday 14th, 2020, along with the music composition of Ari Sen and lighting by Aravind.

One of the long-awaited Tamil movies in the journal of Comedy-romance, Oh My Kadavule, is directed by Ashwanth Marimuthu, who is a debutant. Jointly produced by Ashok Selvan, Abhinaya Selvam, and Dilli Babu, Oh My Kadavule has Ashoke Selvan, Ritika Singh, and Vani Bhojan in the lead roles. Sha Ra and M. S. Bhaskar are doing supporting roles. Oh, My Kadavule would be the most adaptable movie for this February 14 as it deals completely with love and love only.