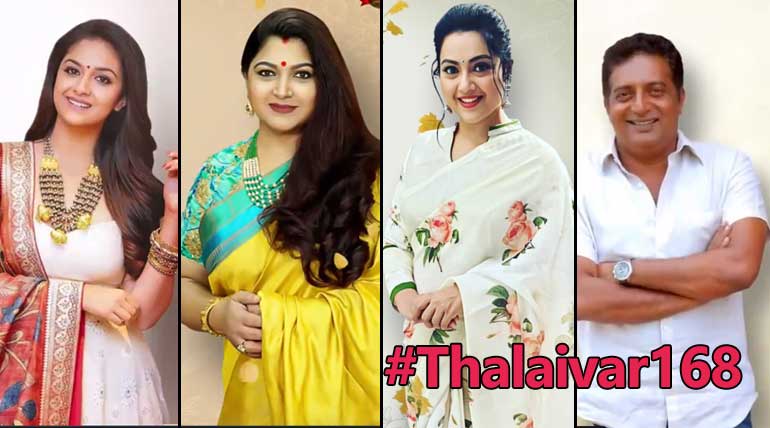 Thalaivar 168 goes on the floor with a complete cast update: Superstar Rajinikanth's birthday update increases this year from time to time. Right from Darbar's album release to Thalaivar 168 cast and crew official tweet.Yes!It is every bundle of surprise for the die-hard Rajinians.

Finally, Siruthai Siva shifts from Thala to Thalaivar for the next mass movie. Directed by Siva, Thalaivar 168 is the upcoming film to go on floors for Superstar Rajinikanth after Darbar under the prestigious blockbuster banner Sun Pictures produced by Kalanithi Maaran.

Director Siva reminisces Superstar Rajinikanth's old memories and co-actors in the upcoming Thalaivar 168 with his cast and crew. Proudly produced by Sun Pictures, the reputed production tweeted the update of Thalaivar 168 casting for the last two days and hoping many more in the hit list.

Acting with Superstar Rajinikanth from childhood in Anbulla Rajinikanth movie, Actress Meena is never weary of co-starring with Thalaivar after 24 years in Thalaivar 168 doing Muthu, Yajaman, and Veera. Meena is all excited to join the untitled film in an unwinding video in the Sun pictures tweet.

Following Meena, the evergreen Khushbu joins the crew of Thalaivar 168 after 28 years. The bubbly charm actress and the classic mass actor Superstar's Annamalai is an unforgettable flick in Kollywood, and the pair gets united in Siva's next to dream back the good old days. Undoubtedly the upcoming Thalaivar movie will be a living tribute for the old heroines of his times.

Best Antagonist character in the South Indian cinema will crack Prakash Raj's name without fail and Siva boards of Prakash Raj despite playing a talkable cameo in Padayappa with Rajinikanth before three decades. Thalaivar's Petta and Thala's Viswasam hit the silver screens last year for salutary mettle, and both ended in luscious box office collection.

A movie without fun is not entertainment anymore, and Siruthai Siva never fails to delight his fans with mass and comedy in an intriguing demeanour of filming. In that way, Actor Soori joins Thalaivar 168 club with a lifetime pride and proud. Soori signs Sun Pictures for the second time this year after succeeding commercially in Namma Veetu Pillai, starring Sivakarthikeyan.

Tentatively scheduled Thalaivar 168 for the Diwali 2020 release. The movie team finally comes with the big announcement of actress romancing Rajinikanth, and for the first time, it's Keerthy Suresh pairing up Rajini to portray the love and support. Thalaivar co-stars mom and daughter from generations notably that Keerthy Suresh's mother actress Menaka have acted with Superstar in Nettrikan, and the daughter shares the screen space in 2019 with Rajini sir.

Thaliavar's birthday treat is already filled as needed with songs, and the Thalaivar 168 goes on the floor soon along with the joined cast. Beforehand, Darbar, directed by A.R.Murugadoss under Lyca Productions, will gonna 'Chumma Kizhi' the theatres for the Pongal celebration as Thalaivar Pongal.