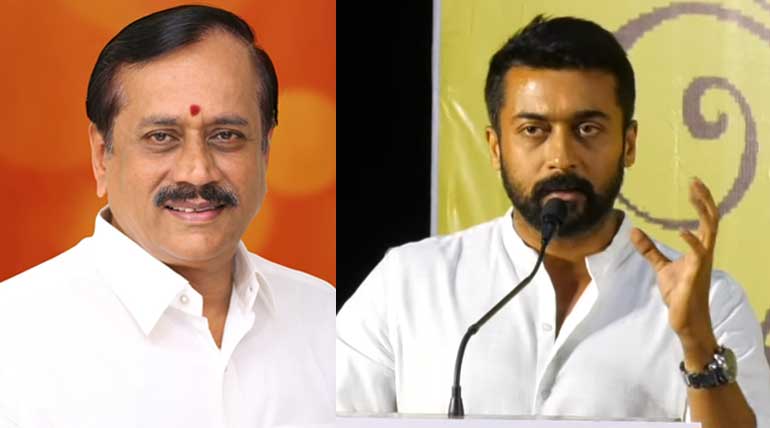 Alarmed with the response of the tremendous popularity of the hashtag #StandWithSuriya, the Tamil Nadu BJP leaders yesterday, i.e., on 15 July 2019 have hit out at Suriya.

The BJP President, Tamilisai was critical, asking what Suriya knows about NEP or the national educational policy. H.Raja, the BJP's national secretary went a step ahead and was criticizing Suriya for disturbing the peace. The only console is that he did not term Suriya as anti-national.

What is the reason for the sudden outburst of BJP over Suriya?

Suriya knows the plight of the rural students for completing their education for more than a decade now.

As a concerned citizen, he spoke about the irregularities of the proposed NEP.  When even big stars and politicians are mum about the issue, it was Suriya who raised it in his trust function. To read about what Suriya spoke read our article " Actor Suriya Questioned about New Education System "

But even to this voice of opinion the state BJP leaders could not tolerate and are up in arms against him. The AIADMK minister Kadambur Raju also criticized Suriya that he will not answer to half baked comments.

In a meeting in Usilampatti, H.Raja was highly critical of Suriya. He said that even when NEP is only in the draft stage, how Suriya can speak like this.  He also questioned is it not disturbing peace.

The other fantastic contention is that the three languages are optional.  H. Raja, said that there is need to save Tamil Nadu people from such duping.

From the criticism of the BJP and AIADMK, a new hashtag "SuriyaFCWarnsADMKnBJP" has gained popularity among the twitter users.  Along with the previous "StandWithSuriya", it is now tweaked more by Tamil People showing their solidarity with Suriya.