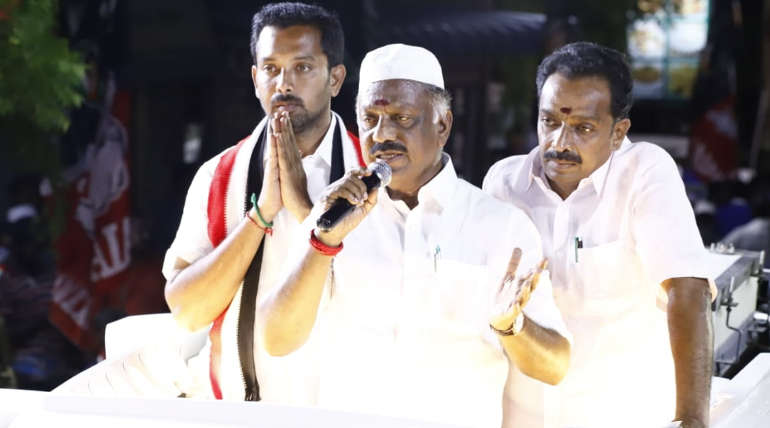 OPS Campaign in Aravakurichi: 1,000 Stalin and 1,000 Dinakaran cannot touch the AIADMK government, said Deputy Chief Minister O.Pannerselvam. Mr Panneerselvam campaigned for the Aravakurichi Lok Sabha constituency electoral candidate Senthil Nathan. Speaking then, he pointed out that DMK had power cuts in when they were in power.

But Jayalalithaa-led AIADMK government since the day of assignment to till now, Tamil Nadu is a state with full filled electricity power. Deputy Chief Minister O. Panneerselvam assured the construction of concrete houses by 2023 for the people living in the hut in Tamil Nadu. Earlier, in the 47-year history of the AIADMK, the MGR and Jayalalithaa betrayed the fact that those who started the individual party began to low.

Previously AMMK Chief Executive Officer actress CR. Saraswathi made a campaign yesterday in Aravakurichi Assembly constituency is supporting the AMMK candidate. Last night, she spoke in Bazaar, OPS and EPS are the slaves of BJP to protect their corrupted money. It is sad to see using Jayalalithaa name and become Modi's slave. How many problems have we encountered in the Modi regime? Even yesterday, a girl committed suicide in regarding of NEET. The GSD tax regime, which has stoked plans for Jayalalithaa's opposition to cash discrepancy, is the slave of Modi to protect both the plundering of OPS and EPS. Modi does not need for India anymore. The country no longer needs this religious power. If people voted for a double leaf, Modi would be good, but the Aravakurichi people would not be good.