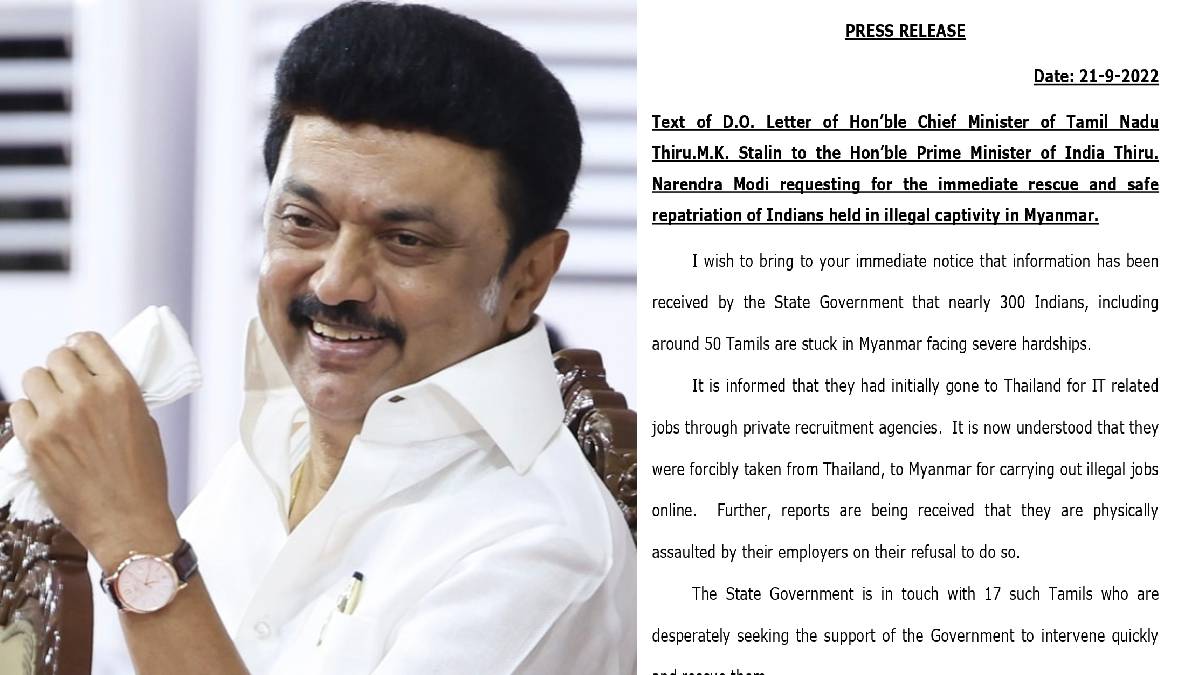 Chief Minister M.K.Stalin has written a letter to Prime Minister Modi requesting the immediate rescue and safe repatriation of Indians held in illegal captivity in Myanmar.

A gang has abducted some youths from Tamil Nadu and Puducherry, claiming to get jobs in the IT sector in Thailand. However, instead of taking them to Thailand, it is said that they are being held in a place called Myawadi in Myanmar. The youths on bail complain that they work for 15 hours a day and are involved in illegal activities.

Meanwhile, Chief Minister Stalin has requested Prime Minister Narendra Modi to take action to release 300 Indians, including 50 Tamils, ​​trapped in Myanmar and bring them back to their homeland.

In this regard, in a letter written to Prime Minister Modi by Chief Minister M. K. Stalin, he said that the state government had received information that Indians are facing severe hardships in Myanmar. It has been revealed that initially, they went to Thailand for IT-related work through private recruitment agencies and were forcibly taken from Thailand to Myanmar to do illegal jobs online.

The Chief Minister also said they were severely attacked because they refused to do illegal activities. He mentioned that the state government is in contact with 17 Tamils ​​and stressed that steps should be taken to bring those trapped in Myanmar home safely.

Chief Minister Stalin has asked the Prime Minister that the embassy in Myanmar should give instructions to the Ministry of External Affairs to take immediate action on the issue.

Nearly 300 Indians, including ~50 Tamils have been lured with IT related jobs in Thailand & are now stuck in Myanmar being forced to carry out illegal jobs.

I request Hon.@PMOIndia to make an urgent intervention in this regard to rescue and bring them home safely. pic.twitter.com/bE2wlFxxkA