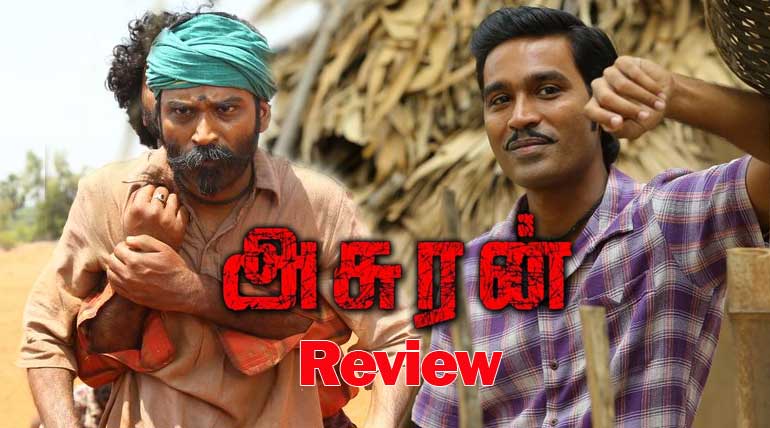 Asuran Review, movie shows humanity in the worst times of oppression and a sure success

Asuran Review proves that Vetrimaaran wins with Asuran in portraying the success of humanity and love, even in the worst kind of oppression. Based on the novel Vekkai by Sakhetya Academy winning writer Poomani, the movie revolves around the 1980s and also the fight for Panchami lands.

Dhanush may get his second national award for acting as a loving father and a fierce youth fighting against caste and Panchami land acquisition. G V Prakash, with his astounding BGM, sets the tone for the movie from the title to the last scene.

R Velraj brings the bucolic background of the movie to its best. But it is the bloodshed in the movie which is well warned by red letters of titles could scare any weak-hearted person watching Asuran. From morning shows, theatres indicate HouseFull LED display.

Vetrimaaran, in interviews, has said that the full essence of the Vekkai novel will not be on the screen with Asuran. But it lays a beautiful platform for Vetrimaaran, Dhanush, and all others to give their best.

Poomani, a native of Nagerkovil, brings the subaltern life well in the book and rightfully portrayed in Asuran. And also never forgets to represent the humanity of the soil with Dhanush and other characters.

Review of Asuran Director, Vetrimaaran does it again

Vetrimaaran, after transforming the novel lockup into an award-winning international movie, Visaranai has done it again. He has given his best to transform Vekkai to today's audience without compromising much for commercial aspects.

Along with direction, he wrote a fantastic screenplay to keep the audience hooked all the 140 minutes he wrote excellent dialogues which gets a good response from the audiences like "They can take away anything from you but not the education, It is harder to go past oppression than to fight it." The love and respect to anyone's mother can be known by how they handle their wife.

Dhanush proved once again why he got a national award for Adukalam with Vetrimaaran. Asuran is many steps above Adukalam, and Dhanush, with ease, carries the movie squarely on his shoulders. The fierce emotions, love for his children, young love flirting, and showing affection for his wife, and many more will surely get him the national award.

The fierce-looking eyes during the fighting for his children and the during care and concern he shows with them are on par with Satyajit Ray Pather Panchali characters. The scene where he laughs while leaving his wife and son is a masterpiece to watch.

Karuna's son Ken plays the angry younger son of Dhanush and also supports Dhanush in carrying the full movie. He well portrays his transformation from anger against his father to that of appreciation and love that his father Karunas will sure be proud of.

He never flaws in even one shot and acts like a seasoned actor. He may win the national award for the children category for sure. Prakash Raj, as usual, does his good advocate role naturally.

Pasupathy, as the loving uncle, does his part well throughout the movie. Manju Warrier, only with little scope and time, does justice to her role.

Vetrimaran winning combination of Dhanush, GV Prakash, and Velraj of Adukalam has done it again in Asuran. GV Prakash sets the movie tone right from the title card with the right BGM.

He leaves space for the dialogues to be well received by the audiences. During the fight scenes, he hypes it to bring in the violence to its core. Not much scope with love songs, he has done his best.

Velraj once again brings the bucolic background of Asuran natural to our eyes. The forest scenes and the night at the forest is well shot by Veldurai and may have a chance for the best cinematography award.

Asuran taken with a budget of 55 crores by V creations Thanu is sure made the best investment. Though giving only a little time for Vetrimaaran after Vada Chennai, V creations have chosen the right time now to release the movie with no significant competition before Diwali. It will bring in more repeat audience and make the film a commercial hit also.

Vekkai's novel being the base, Asuran movie seems to be the happenings of the 1980s. It is the oppression of the power and money that the father Dhanush encounters during the movie.

And the younger Dhanush is fighting against the oppression of caste during the Punchami land struggle in the flashback. The whole film is about oppression in various forms and how subaltern people are affected by it.

The land owned by the Dhanush family is the target of the oppressors, and the whole movie revolves around it. And what happens to the property and the perpetrators you have to see on the silver screen.

Vetrimaaran will be applauded for his sincere efforts to bring in the humanity and love for the family in the movie and maybe given the national award.

The journey of son and father into the forest to transform the son's anger for his father to respect is well done by him. But, too much bloodshed, both in the current events and in the flashback, could be the only negative aspect of the movie.

It is sure to watch to know how riding on the myth of power, money, caste, and other jingoisms will cause danger to humanity and affect love.