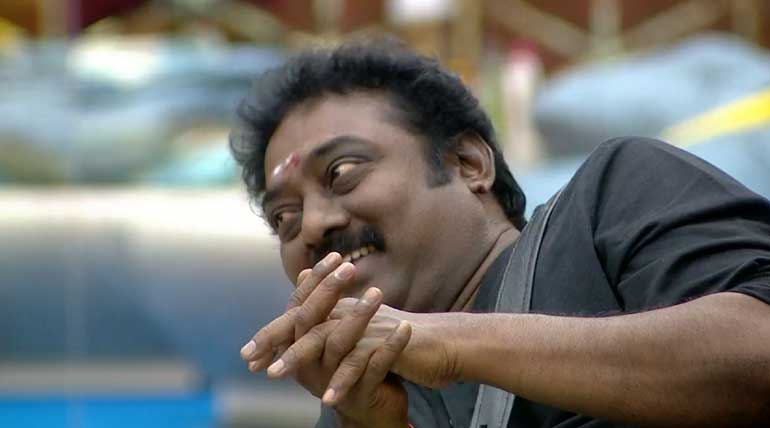 Saravananâ€™s Family:  Saravanan was born to a police inspector father and a nurse mother with four brothers. He got married twice and living with both his wives. He is proud of his young son born recently and loves him very much.

Saravanan, a student of the Adyar Film Institute, is a survivor of Tamil Cinema. Starting his acting career in 1991, he was a busy actor till 1998 acing in many movies.

He was also director of Thaymanavan in 2003. He has produced many movies in his long career. And he acted in most of them. Though not successful as a big star he was liked for his comedy sense and acted in a lot of such movies.

Though he has acted in many movies as a hero only his character acting in Nandha, a Bala film in 2003 and as Chithappu in Paruthi Veeran by Ameer in 2007 made him famous. He got a Filmfare award for supporting actor for Paruthiveeran.

When Saravanan name was announced by many were surprised because of his age. But, Saravanan was happy to participate in the show.

In Vijay Tv interview for Bigg Boss show, Saravanan expressed feeling lucky to participate in Bigg Boss Tamil Season 3 and like to do it for his son.

He also showed a God statue for which he wants to conduct Kumbabishekam after the participation in bigg boss Tamil 3. But for some reason after coming into the show, he seemed to be startled by the contestant activities and wanted to opt-out of bigg boss Tamil 3 show from the first week. But during the debate this week he spoke well and was selected as one of the nominees of next week captain.

As Bigg Boss host, Kamal while introducing Saravanan said a hero of more than 25 films, then a character actor of fame has come to become popular in TV also. He praised Saravanan for his survival for success all through the past for nearly three decades in the cinema industry.

Vote for Saravanan, the successful survivor to stay in the show and show his talents here also. Take the mobile since it is only a few hours to vote for him for this week. Also, cast your 50 votes in Hotstar in the number given below.