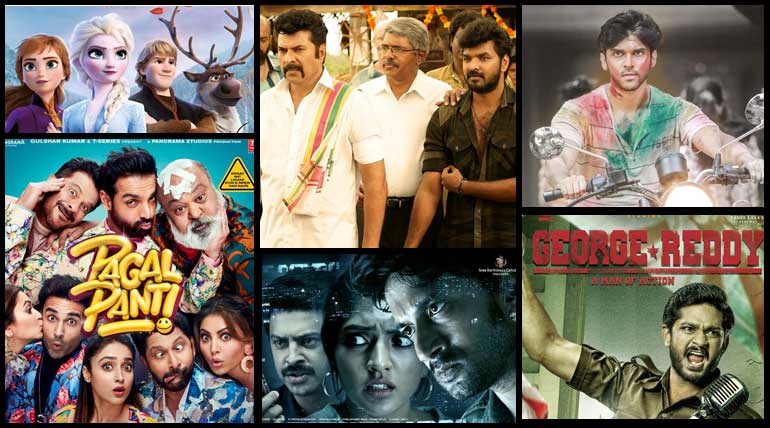 Three more days to witness the following movies in Tamil, Telugu, and Hindi

Pagalpanthi, Ragala 24 Gantallo, and Frozen 2 are expected to hit the screens on November 22. After Diwali release, not many movies have gotten so "spoken about," and these three movies are expected to break the silence.

Pagalpanti outlines the story of the saying "Rags to riches." The movie was outlined as three men considered as losers in their lives by the people who want to ladder up quickly along with their girlfriends. The ploy they play is to fool two gangsters and rob their money and achieve their goal. The goals and the ramifications they encountered were depicted in the movie.

Ragala 24 Gantallo is an upcoming Telugu movie directed by Srinivas Reddy and Srinivas Kanuru produced this under Navhas creations. Satya Dev, Eesha Rebba, are playing the lead roles, and the movie is tagged as a thriller. Sriram, Ganesh Venkatraman, and Musskan Sethi are in supporting roles. Raghu Kunche composes the music and cinematography, and Garudavega Anji and Tammi Raju did editing.

Raja Narasimha, which was stalled due to censor issues, has now got censor clearance and got U/A certification. It is all set to release the movie on November 22. A Malayalam movie "Madhura Raja" has been dubbed in Telugu, and Mamooty is playing the title role with Anusree Jagapathi Babu, Jai, Siddique, and Mahima playing the main cast with Sunny Leone showcased in a cameo role. Gopi Sundar is the music director, and Shaji Kumar cinematographed it.

George Reddy, a biopic, is out this week featuring Sandeep Madhav as George Reddy. The life of a student leader George Reddy also a boxer and a gold medalist who has much influence in the Telangana region between 1967 and 1972, was shot. Sandeep Madhav, Shrinivas Pokale, Satyadev Kancharana play lead roles.

Adithya Varma is the upcoming Tamil movie, a remake of Telugu movie "Arjun Reddy." Dhruv Vikram and Banita Sandhu are playing the lead roles with Priya Anand appear in the supporting role. It was initially directed by Bala. Still, later, due to differences arose between E4 entertainment and Bala, it was stalled and remade with new cast and crew, and it is scheduled to be released on November 22.

Gireesaya is the debut director in the movie, and Radhan scored music for it. Ravi K. Chandran cinematographed, and Vivek Harshan edited the movie.

Frozen 2 is the upcoming Hindi movie scheduled to be released by November 22. Priyanka Chopra and Parineeti Chopra, the two cousins, bring their camaraderie to Disneyâ€™s upcoming sequel. The movie is based on the story of two royal sisters Anna and Elsa, in the Icy Nordic Kingdom.

Elsa is born with magical powers, and the backstory of the same was little portrayed, and the second half revolves around the dangerous journey they both ventures to find out all the possible answers. Jenifer Lee and Chris Buck directed it. The movie is scheduled to release in English, Hindi, Tamil, and Telugu.