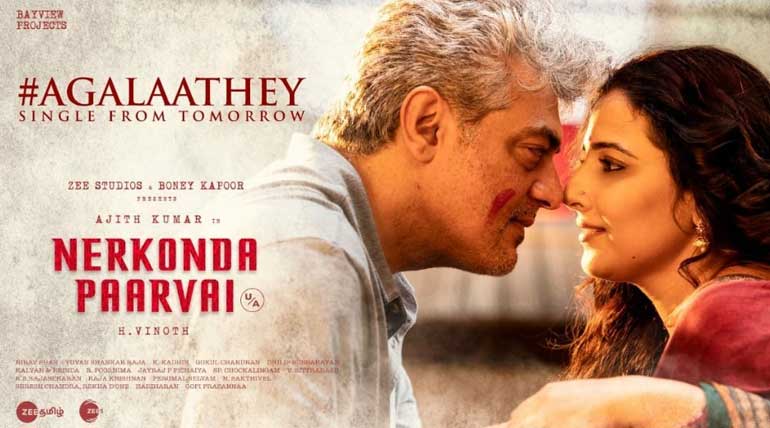 All set to welcome the Agaalathey song

Ajith fans going to be treated tomorrow with the final song from "Nerkonda Paarvai" Agaalathey tweeted the film producer and the music director.

"Nerkonda Paarvai" is the remake of the movie Pink which was released in 2016.

Ajith's previous film "Viswasam" has earned him the best name in the industry and this movie is expected to create a new milestone. "Singappenne" song was released yesterday from Vijay's "Bigil", and the social media is trending it in all possible ways.

The fans of Vijay has amassed huge responses for the song. It is the time for Ajith's fans to take the beacon.

In NerKonda Paarvai, Ajith is reprising the role of Amitabh Bacchan, and for the first time he shows up as "full lawyer" on screen.

Along with the theme song, this move has packaged four songs. Three songs have already been surfaced and received positive reactions, and the fourth song Agalaathey will be out by 6 PM tomorrow.

In the Hindi version, Amitabh Bacchan and Tapasee Banu played lead roles. Vidya Balan paired up with Ajith in NerKonda Paari for the first time and also to Tamil movie Industry.

Boney Kapoor has tweeted this, especially in his page so as Yuvan Shankar Raja. The first three tracks are said to be Vanil Irul, Kalam and Thee Mugam.

This song is said to be in the league of romance between Ajit Kumar and Vidya Balan. Agalaathey song will give tough competition to Vijay's "Singapenne", and for some time in the social websites, these two songs will be surfacing and prompted.