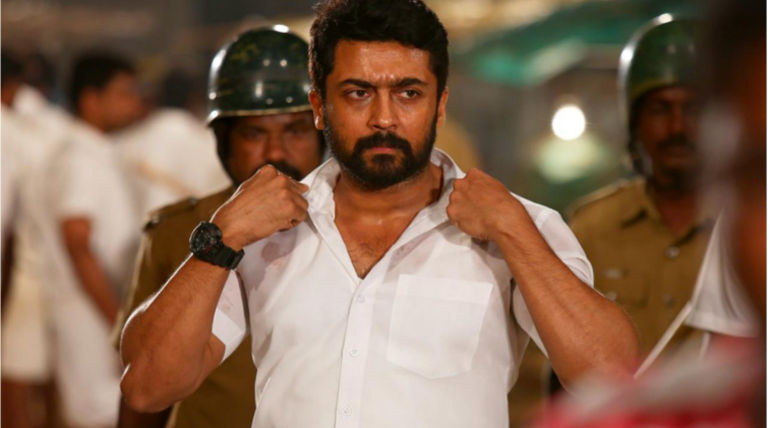 Nanda Gopalan Kumaran a new avatar of Suriya and it's a new combo of Suriya and Director Selva Raghavan. Music of this movie is brilliantly done by Yuvan Shankar Raja. This bi-lingual movie trailer had a huge expectation as the movie is on politics. Selva Raghavan is always known for his own style of film making and he once again proved that he can give a strong comeback as this movie has worked with acting of Suriya.

Suriya is the pillar of the film. He has grown so well as an actor. He is so stylish, and the way he delivers the dialogue is well received by the audience. It's a treat for Suriya fans. The movie has a lot of scope on acting. Selva has worked on Surya strength and dialogue delivery is so apt. This combo wait has satisfied Surya audience and general audience as well.

The movie is about a youngster who wants to do something to society and how does politics help him and did he able to succeed with the politics that's the plot of the film. The movie as a whole delivers with a strong dialogue and it speaks the reality as well. The story is nothing new but the way it has been handled with the engaging screenplay is what differentiates from other crowds.

Sai Pallavi as Mythili and Rakul Preet Singh as Neha Pandian have done a good job. Yuvan Shankar BGM lifts the film as he is always best when it comes to BGM. Surya is back with a hit as NGK. Selvaraghavan first time the movie is Rated U and we could understand after watching the film.

#Suriya was litðŸ”¥ on screen in #NGK.
He carried the movie on his shoulders. His performance was excellent. His angry expression and crying portions were perfect. #Selvaraghavan extraction of work is Tharam!#NGKFire #NGKFromToday #NGKReview

@Suriya_offl Bro I'm Impressed With Your Performance in #NGK

#NGKDAY The Surya show begins and ended in a grand style. First half extremely good with the usual political scenes and casual dialogues ruled more and the second song will be the biggest treat for Surya fans. All rounder family movie #NGKPremiere #NGKFromToday #NGKreview

First half of #NGK seems little dragging, slowly moves into the story. #Suriya has done his perfection. Itâ€™s a usual story line of the one who does to try entering into the political status. Hopefully the second half is better and the story keeps us engaged. #NGKreview #NGKFire

#NGK 1st Half : An Educated youth sees the power of local politicians.. So he himself gets into it.. @Suriya_offl 's acting is fantastic.. There is a transformation scene.. He is Vera Level from that scene..