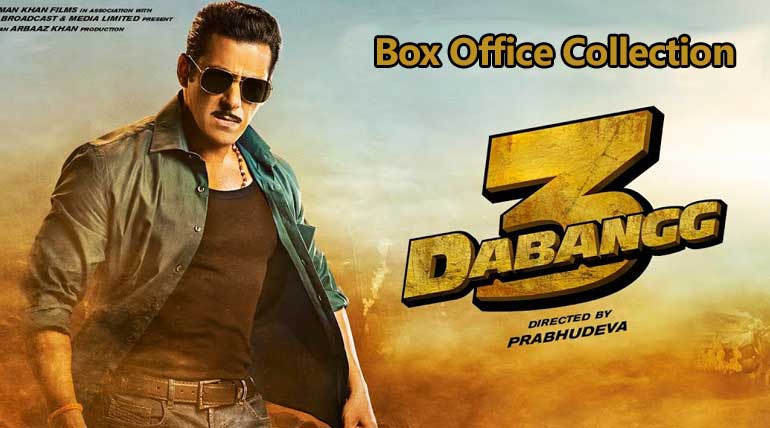 Salman Khan Dabangg 3 Box office Collection Latest Report: What matters for the producer and crew of a movie after release? Obviously box office collection on its note. By the way, Dabangg 3 achieves the leap with some social tits and tats around the country. Salman Khan's Dabangg series sums up Rs.24.5 crore on the first day December 20 collectively in all versions opening to hit the list of box office collections.

Dabangg series 3 ropes the unknown life of Chulbul Pandey once more on the silver screen as a tribute to Dabangg 1 and 2 fans immersing them in laughs and Bhai's swag.

This film directed by Prabhudeva, the young Salman romances debutant Saiee Manjrekar as a lover and Police officer marries Sonakshi Sinha in the culminated performance while handling the unlawful behaviours in his rustic style.

According to trade analyst and BoxofficeIndia.com Taran Adarsh, the box office number of Dabangg 3 may reach more digits if there are no CAA protests all over the country saying in a tweet thanking "Salman Khan's star power and Day 1 would've easily been much, much higher had it not been for the protests.

Resultantly, collection kept fluctuating throughout the day. A substantial sum was lost due to this reason".This must be great lean back since all the college students and youngsters backed up in stepping theatres but all joined hands together for the social cause on the roads.

The analyser tweeted the opening day gross update of Bollywood Badshah Salman Khan's films from 2010 to 2019. And to continue, the Bhai's box office hit high in Bharat movie same this year of about 42 crores in its first day. Despite all those, Dabangg 3 catches up a decent money code compared with all other movies in the tweet list.

Overall critics feel that audiences go buy a ticket, watch Dabangg 3 to feel the rough policeman on screen right from his childhood to love and marriage life with a pinnacle of heavy battling with the villain for the assault of trafficking women.

Dabangg 3 seems well in theatres of South compared to screens of Delhi, Punjab hoping that raw material runs the flick successfully all over the country.