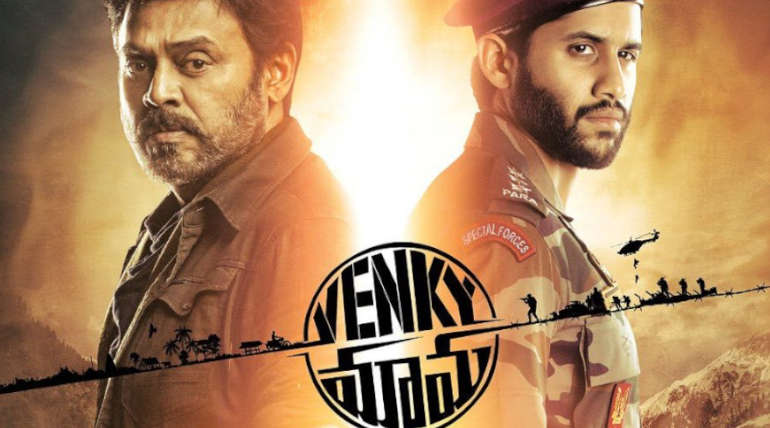 Venky Mama Review: A mild story with emotions: The real-life uncle and nephew stars are flooding the silver screens with emotions in Venky Mama, showcasing their reel life bond to the audiences. Venky Mama, directed by KS Ravindra, seems to be an emotional drama with a mild storyline produced jointly by People Media Factory and Suresh productions.

Venky Mama, starring Venkatesh Daggubati and his son-in-law Naga Chaitanya is all set to hit the theatres screens from today celebrating the weekend. The Mama-alludu based story Venky Mama runs with a comic first half followed by a disaster second half with a hike in climax solely.

The real-life combo uncle and nephew created a leap around Tollywood with expectations of how they do on screen? But all clatter in Venky Mama screenplay and direction.

Venky Mama's simple story revolves around Nasser, whose daughter goes out of house marrying her lover, and both died in an accident, leaving a boy (Naga Chaitanya). Nasser believes the spoiled brat is due to their horoscope, and Karthik (Naga Chaitanya) grows up in town.

Venkat Daggubati portrays the role of Venkat Ratnam(Venky Mama), who decides to support Karthik, his nephew, who is back in the village for holidays. But Nasser's horoscope belief regrets Venkat to stay away from Karthik as his fate gonna kill his uncle's life. Venkatesh, as Venky Mama, ignores the myth stuff and stays full time with his nephew in the village with an intriguing interval block.

The first half moves around Venkatesh's high comedy along with his love affair with teacher Payal Rajput and his cousin's love scenes with Raashi Khanna. Both the heroines played an okay performance in the film. The interval bangs with rage in the story, but the second part spoiled the hike with its unwanted usual scenes and emotions. Knowing his horoscope how Karthik goes to the military to save his uncle's life.

The team expected high emotion in Venky Mama on-screen but failed to portray the same with the screenplay and direction under the lights of Prasad Murella. With a chaos editing by Prawin Pudi, the flashback and existing story need clarification to the audience.

Music by S.Thaman just goes with the flow and not notable as the story is mild emotional background with some military sequels in Kashmir.

Overall, Venky Mama starts the fun ride with a nice breakthrough and recovers in the second half slowly with a twisted climax. Alongside celebrity relatives, Venkatesh and Naga Chaitanya have done their performance well on the screen to stay strong with the bond in Venky Mama.