Suriya gets Kamal and from other unprecedented support for his speech 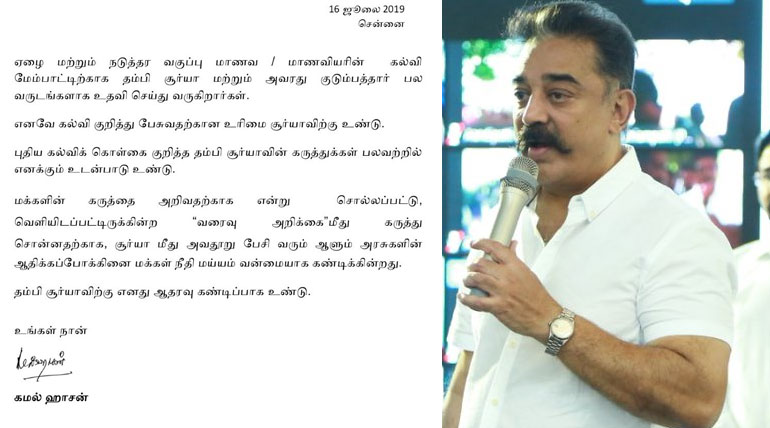 Suriya gets Kamal and from other unprecedented support for his speech

After the backlash from the BJP leaders on 15th July 2019 for his speech indicating the irregularities of the draft NEP or the national education policy, there were many supporters for Suriya in Tamil Nadu.

Kamal Hassan now also a political leader in his tweet accompanied by a congratulation letter to Suriya and condemnation to ruling parties He confirmed that Suriya has all the right and quality to speak about the draft policy as he has been in the uplift of the poor rural students for a long time.

He also said that Suriya and his family have been helping them for years.  It is a big welcome move for Suriya who was badly battered by the BJP and AIADMK for his speech. (Read our article  for details into the BJP and ADMK attack on Suriya)

Support for Suriya from unexpected quarters:

Anbumani Ramdoss, the youth wing leader of PMK also supported Suriya for his stand on the NEP.  He said that nothing is wrong in what Suriya has said and the PMK's stance against NEET still holds ground.

To know about full Suriya speech read our article. He also challenged those who opposed it have the guts to debate in a public forum.

With Kamal supporting Suriya, What is the stand of other celebrities?

With Kamal supporting Suriya over the imposition of Hindi into Tamil Nadu and the NEP, the Tamil people are eager to know what is the stand of the other celebrities.  As usual Superstar, Rajni Kanth remains silent, and even others are scared of the mighty BJP and the ruling party.

Or it could lead to circumstances that were equal to that of the imposition of NEET on the Tamil people when AIIMS and JIPMER were excluded from it. Tamil Nadu with the maximum number of medical colleges for a state with almost all the districts having medical colleges was the worst affected by NEET. Same should not happen with the implementation of NEP and imposition of Hindi.