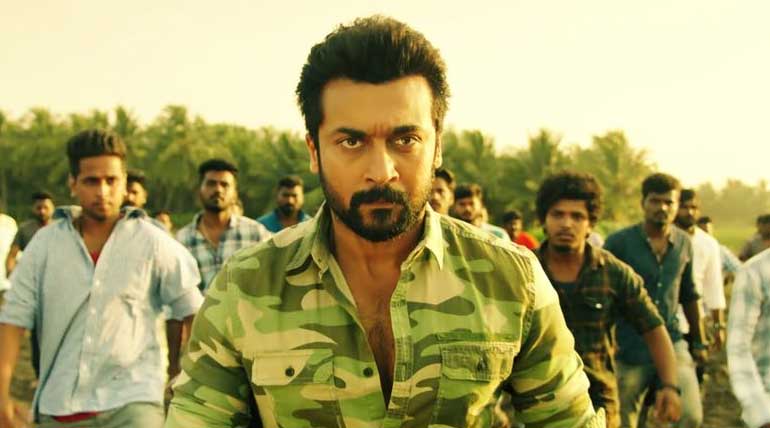 Suriya Starrer Nandha Gopalan Kumaran (NGK) is finally hitting the screens and the political thriller by Selvaraghavan has indeed took the center stage to make use of the summer spotlight and make big bucks with a galore of cinema lovers thriving for an entertainer this summer. After the Pongal festival, Kollywood was pretty confident about the biggies and after the Pongal euphoria of Petta and Viswasam it's been halfway through the year since a biggie movie released and now have Selva's NGK managed to hit the right chord to make it impressive? Go on to read spoiler free NGK Movie review of the film and know about it.

Suriya as Nandha Gopala Kumaran a fearless young rebel with a crazy characterization is the driving factor of NGK used by the maker. He just eases the screen space with an absolute character sketch from the beginning to the end. The film wholly depends on the political backdrop set by the maker designed in a way to engage all kind of audience with his film. Right from the rebel themed outline to romance, mystery and comedy, NGK checks all the boxes as a mainstream film. Most of the story part is dialogue driven rather than other Selva and Suriya films.

The first half slowly gets into the core of the film with a lot of turn of events then and there and gets into the core purpose of the story and the terrific interval block. The character depth handled by Selvaraghavan proves why he is a master in the respective field. As always, the maker nailed with his shady characters which change from each moment. Even a piece of stone in a Selva film has importance and the factor hasn't reduced a bit in NGK too. How each character of the film adds a tone to the story helping to lift the screen power is the key factor with a lot of theatrical moments.

Writing is a solid pulling factor which withheld the film strongly without much logical loopholes. Though the commercial factors were found throughout the film, the track of " NGK Movie " doesn't get away from the desired route. Thatâ€™s were Selvaraghavan stands unique from others and the producer who is known for his unadulterated products stood as a supporting hand for such a film. Though the social message delivered by the film is strong, the solid storytelling made it look away from being a social film and stood more as an artistic blend of entertainment and the needed social angle being the main base of NGK.

While the whole first half had a different Suriya, the second half had a complete shift of flavour after an electric moment half way. Suriyaâ€™s eyes have been made use at a maximum potential after a long time. It is definitely a great comeback for the good old Suriya bringing back all his unique onscreen mould as a character. The core strength of Suriya is to get into the character and play it the gallery giving shape to the character shaped by the maker in a unique dimension. Sai Pallavi who played an important role in the film looks fit to her role and Selva has extracted the right amount of ingredients needed for the role.

The writer in Selva never seems to have stopped experimenting and pushing the limits from his creativity. Writing is the soul of the film well executed with twists and turns and music is another backbone to make the film stand tall with the rich cinematic experience. The cinematographer has done his part well with rich visuals making a feast for the eyes. As usual, the editing looked natural as a typical Selva film flowing at a clean narrative pattern. The film can be said as an upgrade from Pudhupettai to the current trend with a downgraded rawness and focusing more on the side of social responsibility.

The abstract of bloodsucking rawness in Suriyaâ€™s character was last seen in Rakthacharithiram of Ram Gopal Varma where the actor Suriya is seen in a powerful role and change of shades was just handled at ease by the actor. Selva â€“ Yuvan â€“ Suriya trio has rocked big time catering a complete product of entertainment, art and social concern in a single film. Second half mainly lies on the shift of the character and thrill factor maintained from the beginning to the end. Songs with visuals are an absolute show stealer with apt tunes by Yuvan. As always the bgm has lit the onscreen fire by Yuvan and this time it is an out of the park shot by the composer as it is the killer combo of Selva along with Suriya.

Though the pace issues might make the audience wait for a high moment, the highs at each part make it worth for the wait. Such was the goosebumps given by Suriya and the market fight scene as promised given a terrific experience for fans and audience. Rather than other Selva films, the film had a shift of lights and the usual complete dark factor maintained in the recent Selva films is not followed in NGK Movie. Usage of lights to portray the emotions which is a favourite activity for Selva can be seen throughout the film. Political satire in the second half is sure to give some crack to the political people who were trolled with no mercy in the film.

Finally, all the wait by Suriya fans have been worth it and the rumours of clash and misunderstanding between Suriya and Selva has been bashed by the film as the chemistry and quality delivered by the combo was pleasant and a cent percent perfect one. Making way for the yesteryear master to the current trend is the only choice as the maker is been matured enough to understand the expectation of the current audience and managing to give yet another futuristic film. It is yet again proved that Selva has been ahead of time always and this time it doesn't seem to get a late response like the old times as the film has hit at the right chord of entertaining the audience.

Read More:  A Look Back at Director Selvaraghavan Mastery Filmography

Overall NGK is a feast for fans and political spectators while a good watch for movie lovers who are in for a blend of an artistic entertainer from the Suriya Selva Yuvan combo.Rating: 3/5