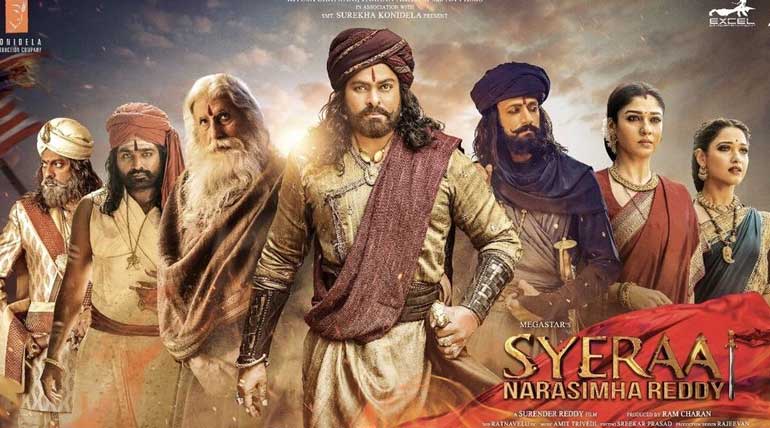 By knowing the websites, their idea maybe is to get a stay from the courts to stream their movie online. A similar such stay was obtained on 26th September by Sun Pictures for their latest movie Namma Veetu Pillai leaked by Tamilrockers which released on 27th. But what happened to it, is the same happening to Sye Raa now. Out of all threat and stays by the court, the illegal online streaming of Sye Raa started hours ago.

Also, to suit his father's megastar image, many stars from across India were made to act in the movies. It includes Amithaab, Sudeep, Vijay Sethupathi, Nayanthara, Thammanah and many others.  But, all their performances which made the movie a must-watch for the Telugu people and to some extent across India is now wasted by Tamilrockers.

By streaming Sye Raa online, they have destroyed the other language markets where it was supposed to run successfully. It included Hindi, Tamil, Kannada and Malayalam. All those distributors who bought this movie on expectations of good theatre collections will now face bankruptcy.

Epic movie Sye Raa fails with Tamilrockers: Tamilrockers now shatter Ram Charan's effort to bring Andhra's history of being the first to fight the East India Company's atrocities in India by his epic movie. Telugu people will surely prefer to see their megastar Chiranjeevi as the renowned first freedom fighter Sye Raa Narasimha but, the other language releases will be hit badly.

Tamilrockers follows tricky to illegally leak Tamil movies online are going strong with someone stop my style. But the day is nearing for them to be caught and to save the Indian film industry.