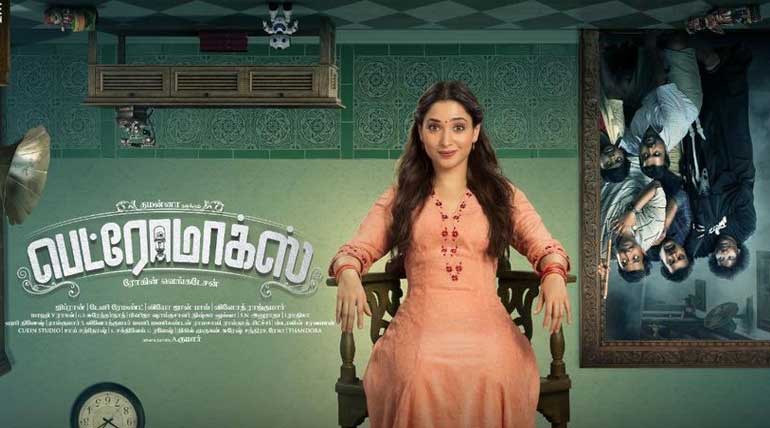 Tamannah Bhatia's 'Petromax' Trailer is out: Petromax is a Tamil horror-comedy movie starring Tamannah in the lead role. The team released its trailer; It is all set to fear the theatres from October 11th, 2019. Petromax is the remake of Tapsee's Telugu horror-comedy movie Anando Brahma. Tamannah makes her comfortable with horror journals after the releases of Devi and Devi 2.

Tamannah and four others are made to stay in the house without ghost intimation, But they seem to have a prior plan. The title is revealed with Goundamani's famous comedy dialogue "Petromax Light' eh Tha Venumaa" from the film Vaidehi Kathirunthal.

Tamannah's Petromax is directed by Adhe Kangal movie Director Rohin Venkatesan under the banner of Eagle's eye Production. Yogi Babu, Kaali Venkat, Livingston, Sathyan all set to fear us with their horror-comedy.

Vaibhav Reddy does a cameo appearance in the movie. The director associates his Last Film music director Ghibran to score the horror effects with a pulse.

Horror comedy is always an epic combo to entertain and hope Petromax never fails to set the trend in its way. Prabhu Deva and Tamannah's Horror comedy movie Devi is a huge hit; She is back now with a possessed character role in Petromax.

Tamannah is back to back with her films this October. Her film Sye Raa Narasimha Reddy has already started her battle today in all South Indian Languages. With the epic happiness, Petromax is also ready to meet the silver screen on October 11. Let us find the Petromax ghost in theatres.