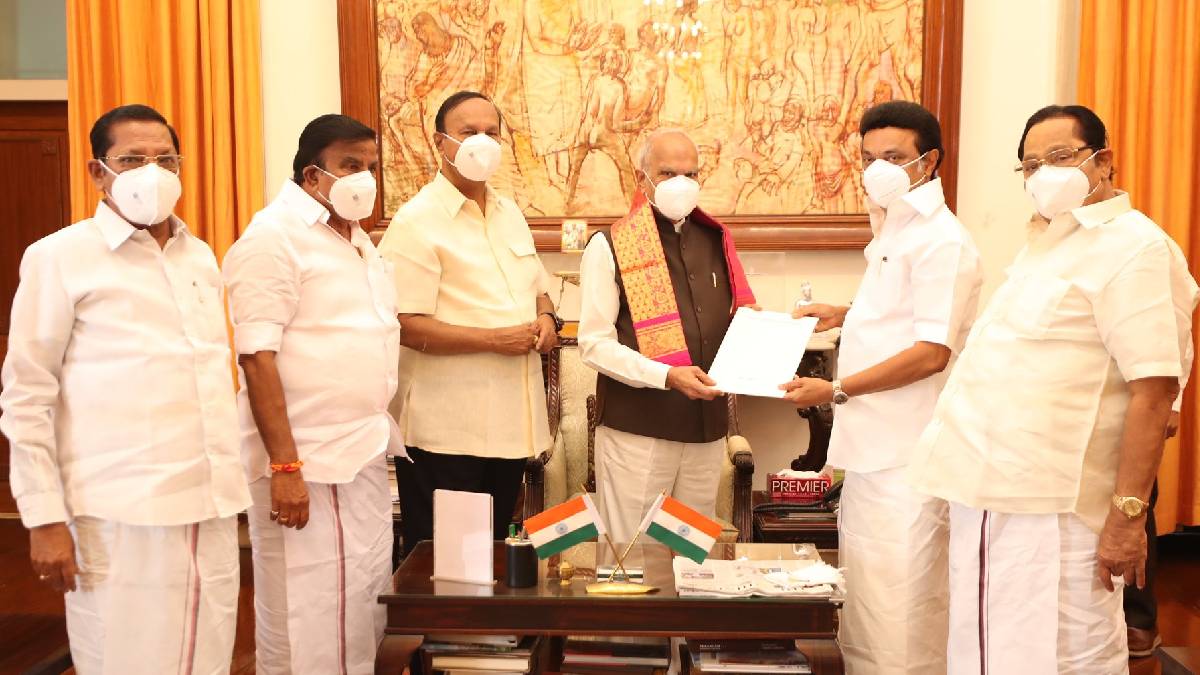 DMK Party leader is elected as the Chief Minister of Tamil Nadu by the people in the Assembly Election 2021.  The DMK alliance has won a landslide victory in the Tamil Nadu Assembly elections by capturing 159 assembly seats. DMK won 133 constituencies with a decent number of votes to rule the state.

DMK party leader M K Stalin chaired a meeting with the newly-elected MLAs and discussed the cabinet minister's list and the inauguration ceremony.

And today, M K Stalin set his visit to Governor's house in Chennai with the support letters from the legislators. Stalin met Governor Banwarilal Purohit at Raj Bhavan in Chennai this morning and submitted the letters signed by 133 MLAs.

MP RS Bharathi said it is expected that the Governor would invite Stalin this evening to form the government. As already decided, the inauguration ceremony will be held in a simple way in Governor's residence.

MK Stalin will swear in the leadership as the Chief Minister of Tamil Nadu on May 7, 2021, at Governor Residence. The ceremony will be with fewer members due to the covid Pandemic.

It is the sixth time where DMK is taking the throne of Chief Ministers in Tamil Nadu. This is the first time where MK Stalin is set to lead the state as the state CM.

Stalin has already started to discuss the COVID rise in the state. Stalin has been carrying out discussions with the health secretary, chief secretary, and other officials to stop the spread of COVID 19.

When these duties are processing simultaneously, the  Chief Minister's office is being polished with new boards and arrangements. The old names of the leaders and party members are scratched off, and the renaming works are in progress.

And to notice, DMK's victory in the Assembly Election 2021 was a massive win with many votes. They won 159 seats, and on its own, the DMK won 133 seats, forming a government with people's support.

The expectation among the people is high in this COVID pandemic. The surge of COVID second wave is striking the shortage of oxygens, vaccines, and medicines.

The number of covid deaths is increasing in the state. There are many complaints lodging against the private hospitals for looting lakhs of money from the people in the name of treatment.

People are with a hope that the new Chief Minister will come forward to question the crimes during this suffocating Pandemic.