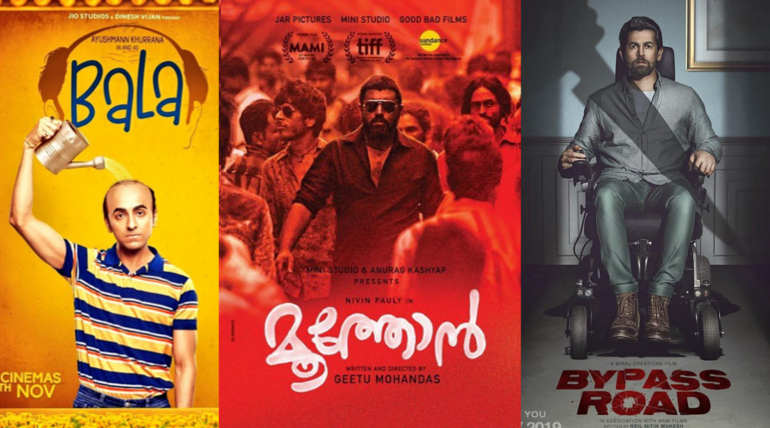 Meeting the silver screens last Friday, Moothon, Bala, and Bypass gross the 5th-day collection of their kind. Neil Nitin Mukesh's ByPass is a simple thriller drama with a good climax. Produced, written, and acted by Neil Nitin Mukesh, the film bags 2.5 crores on its first day. Touting to ByPass, the big screen shares space with Ayushmann's Bala, which sets a huge box office occupancy towards the first week of its release. Bollywood seems encouraging balding everywhere with Bala movie this week, hoping the team to gross more in the upcoming days.

Following the continuing success of Article 15 and Dreamgirl in 2019, Ayushmann Khurrana hat-tricks the silver screen with comedy film 'Bala.' Hitting and competing himself in the big screen with Dreamgirl and Bala, Ayushmann Khurrana's Bala expected to beat the box office of his own Dreamgirl movie in the first week. Bala directed by Amar Kaushik bags Rs 62 crores on day 5 with its intriguing bald storyline. Bala team expects to reach Rs 75 crores in the first weekend.

Continuing with the hits and box office collection Ayushmann Khurrana sets a rage in the Bollywood back to back with his films. The film Bala grossed nearly Rs 62 crores within 5 days; Produced by Dinesh Vijan Bala drama awaits to count Rs 100 crores inside the second week. Despite making love, action, comedy, commercial movie, Bala cracks as a simple yet bizarre beauty obstacle faced commonly in people's life.

On the other side of Bollywood, ByPass Road, which once said to be an action-thriller, turned out to be a normal thriller in screens. Since the first day, ByPass Road grossed about 2.50 Crores and hasn't satisfied the people enough. Even though there are many mixed reviews for the movie, Bala hindered ByPass Road with many positive reviews.

Setting screens both in Malayalam and Hindi parallelly, Geetu Mohandas directs her third movie in the industry. Periodic thriller drama Moothon stars Nivin Pauly, Sobitha Dhulipala, Roshan Mathew, and Shashank Arora in the lead roles. The film revolves around the search of elder brother Akbar who left from Lakshadweep to Mumbai. Moothon earns nearly 3.5 crores on its first day, hoping to gross more in the coming week.

With their exciting kind of stories, Bala, Moothon, and ByPass are ready to step into the second-week collection by ending its opening week with a decent count note.